On December 24th 1951, a group of Catholic clergymen hanged and set on fire a Father Christmas effigy in front of at least 250 children in Dijon, France. Following the incident, the late French anthropologist Claude Lévi-Strauss wrote an article entitled “Le Père Noël supplicié” (“The tortured Father Christmas”) in the literary journal “Les Temps Modernes”. The important question for Lévi-Strauss  is not why children believe in Father Christmas, but why adults make them believe. The solstice festivities comprise the ancient Roman Saturnalia and modern-day Christmas, amongst other celebrations. During these festivities, children take on the role of the deceased, and adults fulfil their duties by offering them presents originating from “beyond” and delivered by a “deity” personified by Father Christmas. For Lévi-Strauss, restitution and sacrifice allow the living to be in peace with the beyond. At the same time, Christmas serves as an equilibrium between adults and children, initiated and non-initiated, those who believe in Father Christmas and those who do not. In this way Christmas reflects the sweetness of life, once you have made your peace with the dead. 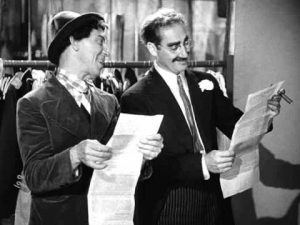 It’s an old joke, but it still has me in a fit of laughter. I’m referring to a scene in the Marx brothers’ “Night at the opera” movie, where Mister Driftwood (Groucho) and Fiorello (Chico) are hammering out a contract that resembles more a toilet roll than a binding agreement. Driftwood wants particular attention paid to a sanity clause in the contract, to which Fiorello replies “Ha ha ha ha ha! You can’t fool me! There ain’t no Sanity Clause!”. He was, of course, referring to Santa Claus.

Christmas is always a special time for children. If, as a parent, you cannot make your child be good around Christmas time, then there’s no hope for you or for your child. Some things just come with living, and Christmas is one of them. Here in the Netherlands, it took me quite some time to get used to the fact that children receive gifts on the night of December 5th (Saint Nicholas) rather than at Christmas. Even so, Christmas remains Christmas. Since I left the UK in 1984, the number of times that I have not eaten Christmas pudding on the 25th, you can count on one hand. 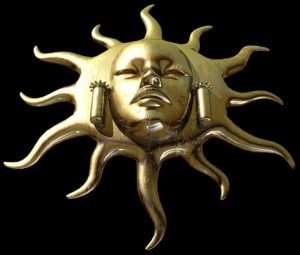 A generation goes, and a generation comes,
but the earth remains forever…

On December 24th 1951, an effigy of Father Christmas was hanged and set on fire in Dijon, France. The incident took place outside the town’s cathedral in front of catholic followers, including many children. This is what the local Catholic clergy said at the time, in order to justify Father Christmas being “sacrificed”:

Representing all the Christian homes of the parish eager to fight against the lie, 250 children, grouped in front of the main entrance to the cathedral of Dijon, burned Father Christmas. It was not an attraction, but a symbolic gesture… A lie cannot wake up religious feelings in a child and is in no way a means of education. May others say and write that they want to make Father Christmas the counterweight of the Bogyman. For us Christians, the festival of Christmas must remain a celebration of the birth of the Saviour.

At the time, there was a heated debate between those “supporting” Father Christmas and those against. Although many Catholics condemned the incident in Dijon, many did not, and went so far as to publicly support the  “assassination”. “Don’t speak to Father Christmas, for the simple reason that he never existed,” was a comment emitted by the archbishop of Toulouse. Could we say the same thing about God, I ask myself? The official Catholic position on the acceptance of Father Christmas as part of Christmas celebrations was quite condemning:

The Father Christmas and the Christmas tree were introduced into the public schools although they are the reminiscence of pagan ceremonies related to the worship of Nature which do not have anything Christian; whereas in the name of outrageous secularism the crib is scrupulously banished from the same schools!

Two things come to mind. Firstly, France was at the time, and still is today, a secular nation. In this respect, unless the school specifically says that it’s a religious school (catholic or other), a strictly neutral stance concerning religious doctrines is mandatory.  Secondly, I could remind the catholic clergymen who took this position, that the worship of Nature in December was practised before the worship of our Saviour. Religion makes great use of analogies, and none more so than that between a God and the sun, source of all life. The sun was considered worthy of worship because without it there would be no light and no life on earth. Darkness and coldness would prevail. In the later Roman Empire, Sol Invictus, (“unconquered sun”) was the roman sun god. The cult of the unconquered sun was also a cornerstone for Mithraism, a religion that was practised in the Roman Empire, and inspired by the Persian worship of the god Mithra. Aurelian decreed December 25th as Natalis Solis Invicti (day of birth of the sun god, also celebrated in Mithraism), and it became an official Roman cult. Under the emperor Constantine, Sunday (day of the sun) was decreed as a Roman day of rest.

2. Saturnalia: “Party-Time in Rome, and mind the children” 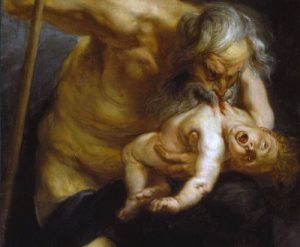 Saturn was the Roman god with jurisdiction over agriculture. He was also considered to be the god of time and, having a similar history to Kronos from Greek mythology, was capable of devouring his own children, and presumably, other people’s children. Saturnalia was a festival of light, celebrating the harvest, that originally started on 17th December to end on the day of the winter solstice. Changes to the Roman calendar moved the climax of Saturnalia to December 25th. Characterised by role reversal (slaves became masters, for example), free speech, gift-giving, and decorating pine trees with ornaments, Saturnalia was still very popular long after Christianity appeared in the Roman Empire. Despite the rejoicing, there was also a more sinister side to the Saturnalia. On the last day, children were sacrificed, placed under the evergreens, and presented as gifts in order to ensure the return of the sun.

3. Taking “Christ” out of “Christmas”

December 25th was a birth date of many gods and was shared by different Pagan cults. A plausible explanation would be that “something had to be done” in order to ensure that the days got longer and the nights shorter.

Although the date of birth of Jesus is not known, it is probably safe to say that it wasn’t December 25th.

In the Gospel According to Luke, it is specified that when Jesus was born, “shepherds were living out in the fields nearby, keeping watch over their flocks at night.” (Luke 2.8)

The weather at that time of year (9th month corresponds to December) is, on the whole, not suited for life outdoors, as noted in Ezra 10.9 where, “…on the twentieth  day of the ninth month, everyone from Judah and Benjamin came to Jerusalem and sat in the temple courtyard. It was a serious meeting, and they sat there, trembling in the rain.”

Well, maybe it wasn’t raining, but:

“ Magi from the east came to Jerusalem and asked ”Where is the one who has been born king of the Jews? We saw his star in the east and have come to worship him” Matthew 2.1-2

It can be argued that the winter was mild, but if as mentioned in Matthew, stars were visible, the chances are that the night temperature would have been quite low, and low enough to jeopardise the life of a newborn. This is only one example of all the inconsistencies that are to be read in the Bible. What is more concerning is that the written word is subject to distortion by religious fundamentalists and followers, in order to suit their cause.

Why was 25th December chosen for the celebration of Jesus’ birth?  Whilst the Bible gives us few clues and many uncertainties as to when Jesus was born, references to 2 dates appear from the 4th century onward: 25th December in the West, and 6th January in the East (Feast of Epiphany in the West). A popular theory is that following the Roman Emperor Constantine’s conversion to Christianity, he used the widely popular Saturnalia festivities to “promote” the following of Jesus and 25th December became the day for celebrating the nativity. If Jesus does represent the sun, he’s in the good company of Pagan gods.

I have come into the world as a light, so that no one who believes in me should stay in darkness. John 12.46

4. The true identity of Father Christmas: Not in Front of the Children

Irrespective of whether or not Jesus was born on December 25th, Father Christmas has got his own story. Or rather, it should be stories because for the French anthropologist Claude Lévi-Strauss, Father Christmas, as we know him, is the result of complex histories that converge over time and space. Is he a myth or a legend? No, this wise and generous man is a deity whose cult audience is exclusively made up of children under the age of 10 or so. Adults don’t believe in him, but they make sure that the children do. That’s the sheer beauty of it: Father Christmas represents, as Lévi-Strauss puts it, “the expression of a differential status between small children on the one hand, adolescents and adults on the other.” Only when the time is right will the children learn the truth, fully emancipate and join the adult world. In the mean time, it is the adults who have complete control over the children, promising gifts only if they are good and obey the whole year around.

Keeping our childrens’ belief that their toys come from the beyond creates an alibi for the secret movement that encourages us, in fact, to offer them to the beyond under pretext of giving them to the children. In so doing, Christmas presents remain a sacrifice to the sweetness of living, which initially consists in not dying. – Claude Lévi-Strauss, 1952

But are the adults in control? Christmas time is “pay back time”, and it can be an expensive business. Not only do the children expect to receive gifts, but it’s the obligation of the adults to fulfil their duty if they want to see another spring. And here we are, back at the beginning of our story. We are back to the question of sunlight, warmth and life. In autumn, as the days get shorter and darkness sets in, so the dead come to haunt the living at Halloween. A pact follows, where in exchange for gifts and services, the dead will go away, and the sun and warmth will return…until next time around.

Who better to incarnate the dead than those who do not belong in society? Slaves and beggars in Ancient Rome; small children today. The dichotomy is there for everyone to see, social status in Ancient Rome, age in our modern societies. But the everlasting truth behind the dichotomy remains and is the difference between life and death, light and darkness. Maybe it’s the sun that’s a god, and no-one else.