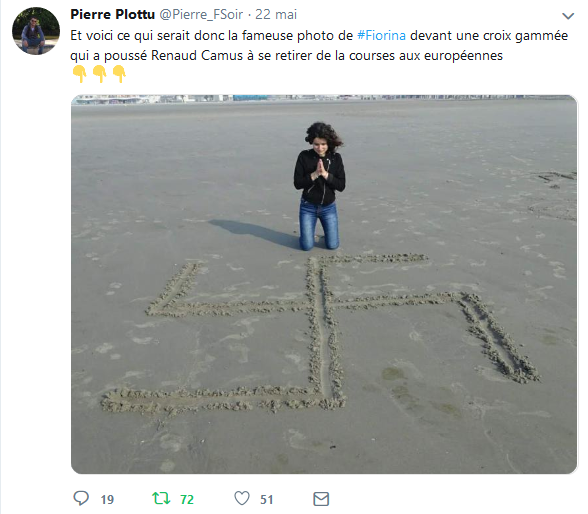 Paul Golding and others like him have had enough of being labelled as racist. According to the leader of Britain First, anybody who wants to put an end to immigration and favours national culture over foreign culture, shows no signs of racism whatsoever.

I’m going to be honest and admit that I really hesitated in using the above image as my racist featured image. But then I thought, “Oh, what the hell because this is really who she is, and it’s my blog anayway.” Fiorina Lignier is a 20-year-old French activist who, when she is not directly provoking the Fifth Republic, is studying Aristotle and his chums at University and spends her Sunday afternoons at the beach. She became famous when she got hit by a grenade a year ago, whilst demonstrating with the Yellow Vests in Paris. She claims to have been on the other side of the road to where police were attempting to stop vandals from destroying shop windows. Lignier lost her left eye that day and has undergone several operations since. She has just published a book entitled,  “Tir à vue, La répression sous Macron “ (Shoot on sight, repression under Macron) where she denounces the violent despotism of the French government.

According to Paul Golding’s extreme-right-wing “Britain First” party, Fiorina Lignier is just a pretty French philosophy student who is the latest victim of good old French repression where,

A side-effect of heavy-handed police responses to ‘Yellow Vest‘ (Gilets Jaunes) protests in Paris and other cities has been to push many peaceful protesters towards more radical politics.

Paul Golding and others like him have had enough of being labelled as racist. According to the leader of Britain First, anybody who wants to put an end to immigration and favours national culture over foreign culture, shows no signs of racism whatsoever.

So let’s get this absolutely right. Fiorina actually admits that the racist picture featuring her on the beach in a compromising position was taken when she was a stupid 18-year-old and reflects in no way her political views. The latter of course, are incompatible with the political ideologies of La Ligne claire (The Clear Line), an extremist party she joined, led by controversial writer Renaud Camus. Following the publication of the photograph, she left the party as quickly as she had joined it, and caused the party leader to withdraw from the European elections.

Renaud Camus believes in the “great replacement,” where one civilisation (no prizes for guessing which one) is slowly replacing another. France will be still be referred to as France by historians, but in name only. The country we all so dearly love to hate, and that I so lovingly left, will have only retained its name and, akin to the native American Indians,

We, Europeans, will be very lucky in the end, if we get the right to open gambling casinos in our reservations.

The photograph is much ado about nothing, really. It is a simple snapshot of a rather silly little girl having fun at the beach.

But who am I, a sour middle-aged plonker, who doesn’t respect the views of a twenty-year-old philosophy student who just wants to give back the country I don’t even live in anymore, to its rightful owners.

Now let me tell you about who I really hate and have had enough of – people. I hasten to add that it is not everybody, but those who shout from the rooftops, “give back our country to us, the people, but not any kind of people, only those who are born in the country in question, and who are preferably white and good-looking.“

As if the people would form a better government than the so-called elitists that we are supposed to get rid of. Socrates saw this way long before I did and was way more intelligent than I am. Like me, he could do nothing about it, but at least he tried.

Deep down, I really agree with the statement, but only if it be modified. Let us not give back the country to the people, but let the people give back to the country. The latter sounds much better and is infinitely more feasible because most of us could participate in this process.

I am convinced that the only political and philosophical line that exists today is the one that runs between “anti-replacementists” on the one side, and “replacementists,” those who promote the great replacement. – Renaud Camus

For Camus, it’s all big business where financial clout joins hands with moral principles and both end up hiring cheap foreign labour in an anti-racist sort of way. Of course, Renaud Camus is not to be confused with his namesake Albert Camus who thought that the greatest philosophical question was that of suicide. Or are the two concepts related?

But I digress. Back to the people I hate.

I’m living in a fantasy world, am I not? Where people would actually feel a gratefulness towards the country in which they live, would benefit from giving and receiving, would learn from one in order to teach the other. It would be a country whose national pride is not the purity of its ethnicity but the strength of its emotional awareness. These attributes must originate from all sides with each and every one of us giving as much as, if not more than, we receive.

Fiorina Lignier’s hatred of the ruling classes will get us nowhere. Renaud Camus’ fake white supremacy, originating from a castle that has lost its place in time, will get us into trouble. But the most dangerous of all, is the ruling elite ignoring the day-to-day concerns of those they govern at home, and promoting unethical foreign policies. Leaving the problems unresolved and not tackling the caveats related to unsuccessful assimilation of entire communities, will only predispose people into ad lib preconceptions concerning the problems they face, the most popular of which concerns the effects of allowing others from beyond our shores to come and live amongst us with all their beliefs and rituals untouched and intact.