To combat the absolute fakeness of big brother Mark Zuckerberg’s infernal Facebook machine, I deleted my profile and entered a new one in the hope that Facebook would forget all about me. From being a male D.Upe, I became just an ordinary female S.H.Muck, to be pronounced with one swell burst of your very finest lung air in order to appreciate my Facebooked sense of humour that is virtuality at its very finest.

My ruse had the advantage of bringing me once more into contact with the profile set-up page that Zuckers (I may call him that. After all, he’s been sending me ads for the last three years) dreamed up before Bill Gates had time to say “USB stick.”

Apart from asking me the usual stuff like, what’s my favourite colour, what size shoes I wear and whether they are mountain boots or stilettos (for the ads, you understand) I was rather intrigued by Facebook’s security system that was put in place just in case I forgot my password. As if I would forget a password that instead of being my cat’s name, had to contain three special characters, five irrational numbers (figure that one out for yourselves), two upper-case and three lower-case letters, interspaced by the square root of pie on a Thursday morning. Well, I suppose it’s just as well because I managed to name my cat “Dick!”

I had two choices for password recovery. I could leave my mobile phone number but would run the risk of receiving a phone call from the White House just before the presidential election. Rather risky I thought, but not as risky as the second recovery tool which was to send a sample of my DNA which is mine and nobody else’s, to be stored in the Facebook cloud until the Facebook cloud disappears or it rains on the skyscraper belonging to Cambridge Analytics.

The truth of the matter is that although good old Zuckers thinks that he is in control of the whole situation, he isn’t. He may well know what I’m going to buy for Christmas and why I’ll never vote for Marine Le Pen, but there’s one thing he will never know, and neither will you – whether I’m really a  man or a woman (unless I send him my DNA of course).

Just think about it for a minute. It may seem crazy, but apart from your boss who you know secretly follows you on Facebook, how many of your Facebook friends are real? And, worse still, how many of them are really what they say they are, namely a man or a woman? Can you trust an avatar to tell the truth about that gorgeous blonde who is insulting every post you publish, or that rather good-looking guy who is spreading his Alt-right philosophy around? Come on, be serious. Can you really trust these guys and girls?

Not withstanding the uncertainty of being insulted by a man or a woman, have you seen the things these people post? Digging up peer-reviewed articles from exotic journals with a comment saying, “Everybody knows this, WTF!!” Well sorry, but I’m not as clever as you are. I’m just an ordinary plonker who doesn’t have time to search editorials from the Najurabu Herald, reading them thoroughly, and posting my enlightened views on Facebook.

And what about those photographs that appear on my timeline without me asking? Do I have to endure the capture of a moment of happiness from relationships that are way better than mine is? Or are they? If you are having the best time of your life with your loved one, is the first thing you think about, “Christ, where’s my mobile because I just have to take a selfie and post it on Facebook, just in case I forget how happy I was!”

Well, just to be honest, he’s one of me when I was megasuicidal.

Yep, I shocked you didn’t I. With George as a username, how could you have known that I had tattoos.

But despite all his faults, dear Zuckers has made a success of transforming a sophisticated email machine into an existential monster who wakes you up in the early hours of the morning even before you do. Withholding your urge to do what a man or woman has got to do, first thing on a Monday morning, you switch on the dreaded iPad that doesn’t connect to the 5G network run by the Chinese because you accidentally updated the tablet’s software the night before.

But the most important lies in the top right hand corner of your screen – a magic number hanging from a bell, that testifies to the recognition of your existence by others. You are not trapped in the confines of a computer screen, looking in from the outside. This is what it means to be human – the time of audience participation is upon you. What a disappointment when you find out that 13 of those messages are to inform you that yet another person you don’t know has posted a message in a group you completely forgot you belonged to.

The last message reflects the closeness that exists in Facebook – it comes from Zuckenberg himself, the big brother looking over your shoulder, checking that every move you do, every thought you have, is in line with the moral imperatives of a network that has outgrown its original purpose. 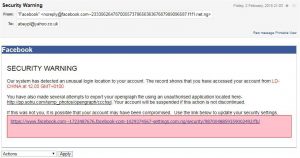