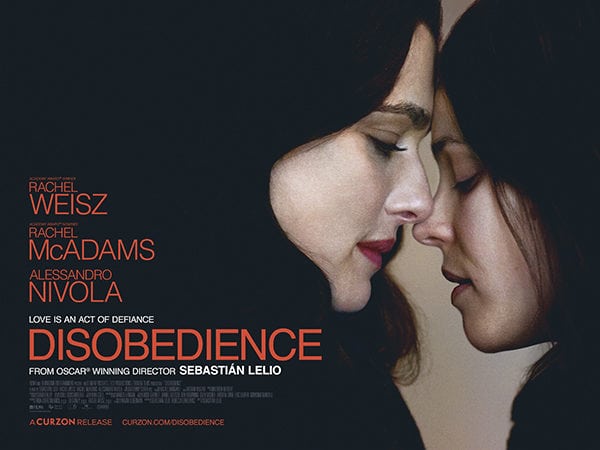 Disobedience is a compelling and beautiful film relating the transgression of two women in a more than conservative society run by men and religion. Nothing new you might say, but that is what makes the film even better. It is a drama that anyone can relate to and everyone should. It poses the question of the role that religion and tradition play in regulating love that isn’t described in the sacred books, and a woman’s question to freely express that love.

Based on Naomi’s Alderman’s novel of the same name, Disobedience tells the story of Ronit (Rachel Weisz), the only child of a rabbi – the Rav – returning home to attend her father’s funeral, years after having left a closed Jewish community as an outcast disowned by her own father. She reconnects with her childhood friend Dovid (Alessandro Nivola) and his wife Esti (Rachel McAdams), and realises that the reason why she had fled – Esti’s stolen kiss under a tree in a north London park – was in fact the beginning of a deep love that never went away. It was a love that was strictly forbidden, a love reflecting an infidelity to a religion and a defiance of a patriarchal society based on tradition, that finds excuses for its very existence in the words of sacred texts and the sermons of the Rav.

God may very well have given us our families and in that case, we must thank God we can choose our friends and relationships. Ronit is torn between wanting to fit in the community, albeit for a few days, in order to pay her last respects to a father who never forgave her for being a rebel and a lesbian. She had never forgotten her father’s cry of “Hashem help me!” when he learned of the two girls’ relationship.

Ronit had the strength to rebel against a community that stifled her desire for freedom of choice and repressed her sexuality. Upon her return, she rediscovers Esti who did not have such strength and was “cured” of her homosexuality by marriage. But there is no stopping a desire that comes deep from the heart to invade every muscle in your body. Esti’s passion for Ronit rekindled years later to offer them an afternoon of urgent yet tender passion in an anonymous hotel room. The love between Ronit and Esti was, for an afternoon at least, an act of defiance where the body disobeyed convention. The disobedience was short-lived, not for lack of passion, but due to an inability to protect what is most fragile and humble before the Divine.

Disobedience explores the notion of free will and its relation to the status quo determined by men, religion and tradition. “It’s my house we’re talking about. I keep it in order,” Dovid tells questioning members of the community.

Free will, sermons the rabbi for the last time, is what characterizes us as human beings who are the only creatures to, “hang suspended between the clarity of the angels and the desires of the beasts.” It is this free will that allows us to disobey. But disobedience often comes at a price, and for Ronit and Esti that price comprises a loss of freedom. It’s a reality that is hard to accept for Ronit whose return to New York is imposed by the community not accepting her, and her unwillingness to cause trouble. “It’s easy to leave,” Esti reproaches her. “No, it isn’t,” she replies. Esti too, has definitely lost her freedom after having had the courage, thanks to Ronit’s presence, to demand it. She cannot escape her responsibility and feels obliged to comply with tradition and step in line with the community. Or just maybe, she is too scared to step out of the prison she was born in.

Disobedience is a slow-moving extremely well filmed account of two women’s struggles to express their true selves. They are caught between a need to live their own lives and their responsibilities towards the community they were born into. The absence of violent words and the almost subdued ambiance throughout reflect the inescapability of Ronit and Esti’s fates.

As the transatlantic sun slowly embraces Ronit’s body as she travels from New York to London, it is as if she were being sent on a sacred mission, having received the approval of the heavens. But it was a mission that was doomed to fail.

Esti’s fate was also sealed before she could muster up the courage to actually leave. She asked for her freedom but ended up by accepting her captivity.

I ask myself the question, “why?”

Why was true love imprisoned within the boundaries set by Divinity and prohibited by men and women, in such a way? How could the onlooking community with its fanatical rituals, beliefs, and blindness for the unconventional, lack so much compassion and empathy?

In the end, though, there is no answer and not even authority and convention were to blame. Ronit and Esti were not judged with harsh words, were not physically threatened but were unconsciously subjugated by the mere presence of others who belonged to deep-rooted convention. The members of this Jewish community were not the culprits, and I could not even make religion a scapegoat. All just happened to exist, to be there, and their presence was enough to exert an uncompromising stranglehold on the imprisoned souls of two women who did nothing else but passionately love each other in a community secluded by religion.