Do you remember what you were doing on 10 March 2001? I certainly don’t, but then again, I’m an expert at forgetting things when it suits me. And if Prince Andrew’s BBC interview is anything to go by, so is he.

It’s one thing not remembering if there was a bar at Tramp’s, but not remembering if your best buddy’s mansion in New York has a first floor is quite another – especially if you’ve slept there for 4 days. I suppose though, that 4 days is the minimum amount of time needed to break up a friendship and is a lot better than just not returning phone calls and crossing a name out of an address book.

According to the prince, staying in Jeffrey Epstein’s New York mansion that he describes as “a railway station,” was the “honourable thing to do,” and was “convenient,” being a stone’s throw away from New York’s Red Light District. Sorry Andy, you’re a bit confused – Amsterdam is the place to be for a bit of hanky-panky behind a shop window!

But what about the foot massage on the first floor of Epstein’s mansion you didn’t know had a first floor? A great way to break up a friendship, I must say. I had to google what a foot massage actually was, only having paid a visit to my physio for back pain. 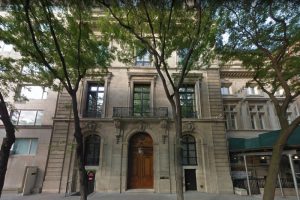 We cannot be certain that it’s my hand on her…whatever it is, left side. – Prince Andrew

It’s called a waist, Andy, and when it belongs to a woman you’ve only just met, it’s a no-go area unless there is certified written mutual consent or cash payment upfront.

But who cares what actually happened and whether Epstein was a very good friend, a friend, or just an acquaintance. You were in all of this because of Ghislaine – she was your friend, not him. And you did it with the aim of learning all about the world of business.

It was his girlfriend [Ghislaine] who was the key element in this. He was the “plus-1” to some extent… – Prince Andrew

And yet, despite all the perks of being a prince, your fondest memory remains a pizza pescatore in Woking, renowned for its royal appeal.

Don’t tell me you can get foot massages there too. All part of the service, I suppose. But Amsterdam remains the place to be for foot massages, not that I’ve ever had one there. In fact, I’ve never visited Amsterdam’s Red Light District, and I have a photograph to prove it.