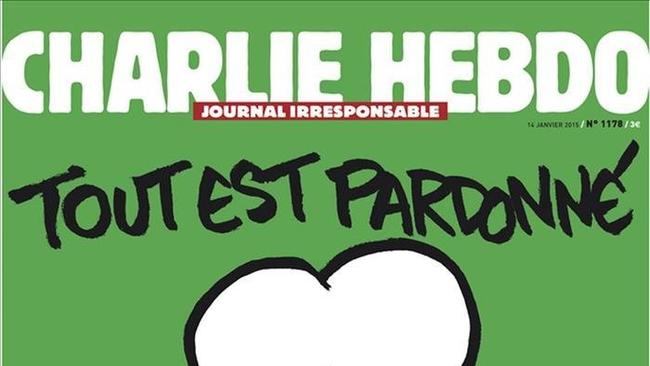 The Kouachi brothers ran into the street shouting “Charlie is dead”…Today’s Charlie-killers are loose on the Net and in the White House…But Charlie is alive and well. 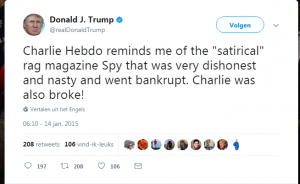 Well Donald, who do YOU remind ME of?

In the same vein as Charlie Hebdo, this post is provocative and can endanger your mental health.

I want to play the devil’s advocate and defend Charlie Hebdo and the cartoons published week-in-week-out that seem to upset just about everybody. The fear of upsetting the wrong people should not be part of the daily life of a cartoonist – or a blogger for that matter. Cartoons are a particular form of art where the world and people in it get deformed and offended, but there lingers a smell of truth once the offence has subsided. So, tough luck, World – this Charlie’s not for turning because he’s not even shaken by your offensive remarks.

Many, I fear, do not know what the French satirical journal Charlie Hebdo stands for, and were probably unaware of its existence, before the tragic events that took place at the journal’s office, in January 2015. The worldwide solidarity shown towards Charlie Hebdo, was – of course – totally fitting. Provocative and sometimes distasteful cartoons do not justify mass murder. However, I ask myself if most of the people participating in the world-wide show of solidarity really know what Charlie Hebdo actually stands for. 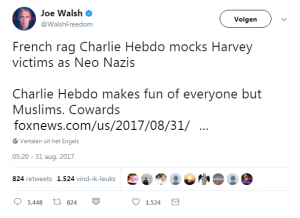 Joe Walsh did try to redeem himself by tweeting, “Only an idiot would think I wasn’t aware of the attacks. My point is Hebdo has gone soft on Islam since the attack”. As he even got it wrong second time around, for Joe’s benefit – and a few others, I suspect – this is what Charlie Hebdo actually stands for,

Charlie Hebdo has no need of God, nor any need of Wall Street. Charlie doesn’t need two cars and three cellphones to be happy.
To be happy, Charlie Hebdo draws, writes, interviews, ponders and laughs at everything on this earth which is ridiculous, giggles at all that is absurd or preposterous in life. Which is to say – very nearly everything. Because life is so awfully short that it would be a pity to spend it whining in dismay instead of laughing it up a storm.

If you look under the title “Charlie Hebdo” you will read the 2 words “journal irresponsable” which qualify Charlie Hebdo as an irresponsible newspaper. Charlie Hebdo is, indeed, irresponsible, but only for overestimating people’s’ capacities to understand what it is trying to say through its provocative and very direct cartoons, that are invariably taken out of context. The editorial stance of the paper is quite the opposite to what is generally perceived. In any case, I would rather a satirical paper with its basic sense of humour – and yes, I do laugh at their humour – that provokes reactions, rather than a bunch of undercover hungry paparazzi running after a helpless princess, or a mainstream newspaper headlining that three judges are “enemies of the people”. This is not because I have a warped sense of humour, but because I know what Charlie Hebdo is saying through its headline-grabbing front-page cartoons. Charlie Hebdo’s editorial stance is occulted by the sheer provocation of the journal’s cartoons, which have to be understood in the context prevailing at the time of their publication.

With its cartoons, the journal has always mocked often serious and even tragic events, by using a very basic and somewhat irrational schoolboy sense of humour. But the mockery is accompanied by a very clear opposition and/or criticism to the subject matter depicted by the cartoon. This technique is applied to anything and anybody, from the pope to your mother-in-law – if she deserves it and if you have one. This broad-scale derisory prowess is underscored by an in-depth study, carried out by the very serious Le Monde  newspaper, which shows that Charlie Hebdo is far from being obsessed with Islam, as most people think. From 2005 up to the date of the attack in january 2015, only 38% of the front-page cartoons mocked religion, 7% of which directly targeted Islam – three times less than the criticism of Christianity. In fact, if Charlie Hebdo does have an obsession, it was probably directed against President Sarkozy and the French National Front party. If anything, Charlie Hebdo is a left-wing publication, against all forms of racism, but intransigent when it comes to religious obscurantism – and that’s where it hurts. Even the president of France’s biggest anti-racism movement – SOS Racisme – described Charlie Hebdo as being anti-racist.

Charlie Hebdo is the biggest anti-racism weekly in France… Every week, more than half the paper’s content is directed against racism – Dominique Sopo, president SOS Racisme 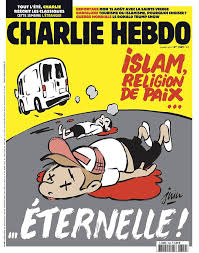 Following the Barcelona attacks, Charlie Hebdo published a front-page cartoon showing two innocent pedestrians run-over by a white bus, with the caption, “Islam, religion of peace…eternal.” – with “eternal” referring to the “eternal peace” obtained after death. Cries of Islamophobia were echoing all around the Net and international media, and the weekly was accused of associating Islam with death. In France, certain politicians were also quick to point out the dangerous tone that the weekly was setting in the discourse with Islam, but all were missing the point. Islam, religion of peace, was not being unduly criticised. The true message of the cartoon was that, too often, innocent people were being killed by Islamic fundamentalists who were just putting into practice what the Koran had tought them, in the very same way that Christianity operated hundreds of years ago. One cannot just ignore the violent passages in the Koran, because it is quite obvious that a non-negligible proportion of Muslims do not. Whereas in the Christian Bible it is sometimes difficult to ascertain what Jesus actually said himself, for Islam it is Mohammad’s Koran reflecting the words of Allah, and no-one else. What is said cannot be disputed, yet alone condemned and opposed by “moderate”Muslims, even if they wanted to.

Instead of condemning, Muslims ignore. In repeatedly qualifying Islam as a religion of peace, Muslims are, in fact, muting the reaction of the West to repeated terrorist attacks, and are trapping themselves in their very own cognitive dissonance. 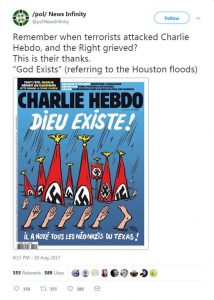 In the aftermath of hurricane Harvey, Charlie Hebdo’s front page caused widespread condemnation, especially on social media in the United States. Again, most of the reactions underscore a profound misunderstanding of the message the cartoon was intended to convey. The cartoon depicts drowning limbs saluting Nazi flags, with the caption “God exists – He has drowned all the Neo-Nazi’s in Texas”. Detailed analyses of the cartoon and the message that it sends – supposedly disrespect for the victims, classified as Nazi’s – has been the subject of many a tweet. Others have accused Charlie Hebdo of forgetting the world-wide support received after the dreadful attacks of 2015. All have missed the point of the cartoon, despite the message sent being clear and rational – in a Charlian sort of way. The fact that Charlie Hebdo, once again dare I say, has used a cartoon to say the unsayable, and provoked such an outcry, underscores the power and usefulness of cartoons and the talent of their creators.

To understand the cartoon you have to switch to “cynical mode” and not take the cartoon at face-value. The cartoon is not attacking the victims of hurricane Harvey, but well their president, Donald Trump. During the time of a natural disaster, the American president can make us forget the effects of his own disaster – his policies both at home and abroad. In particular, his ambiguous reactions to the Charlottesville demonstration by Neo-Nazi groups, where he ended up blaming both sides and condemning neither. The violence in Charlottesville was an acrid reminder of what went on in Germany in the 1930’s, where Nazi’s and communists clashed violently in order for one to silence the other.

Texas, who voted for a president who tolerates Nazi demonstrations and is so determined to ignore the effects of global warming, might well be in for some more tough weather in the very near future, courtesy of the lodger in the heavens, who might be looking down on us after all. In listening to his close advisor, Robert Walker, saying that climate change research at NASA had become “heavily politicised”, Donald Trump has proposed to terminate 4 NASA-led climate research projects, arguing that NASA should be more focused on outer-space than on planet Earth.

It is probably fair to say that the true cynics may well be found outside the offices of Charlie Hebdo, and within the offices of the White House. In visiting Texas in the aftermath of hurricane Harvey, Donald Trump was more concerned about his own ratings and image than by the victims of the disaster. He claimed to having experienced the devastation at first hand,

However, camera footage exposed the American president for what he really is – worried about his poll ratings, television audience and, last but not least, his $40-a-piece cap business. He has also confirmed, once again, that he is not totally in control of what he says. His wish for the thousands of victims who had just lost their homes, to “have a good time”, is cynical to say the least, and could be used as a caption for a Charlie Hebdo cartoon. How can the homeless and dead have fun? Unless, of course, that the hurricane itself is fun and exciting and you’re only passing by, anyway. 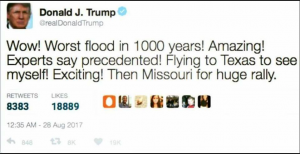 Surely Donald Trump meant in the tweet that he flies to Texas to see “for himself” and not just admire his own performance? Or did he?

Before casting a judgement on the moral values of others, Americans should critically analyse their own values. We, as Europeans, have adapted freedom of speech and opinions – in the aftermath of WWII – in order to bury, but not forget, the gruesome face of Nazism. America can be proud of its First Amendment, which represents freedom in its purest form. Donald Trump is even prepared to defend this freedom with guns, if necessary – courtesy of Amendment number two.

The Second Amendment gives shameless nostalgic fascists the power of words and gunfire. As Europeans, we cannot and must not allow the sort of physical provocations and defiance that took place in Charlottesville, even if we have to limit our freedoms. But words and cartoons are harmless and have not murdered anybody. You can ignore harsh words but not flying bullets coming your way. We must now decide, once and for all, whether publications such as Charlie Hebdo, who disturb and offend without inciting hatred, are allowed to continue. If so, we must defend them, like a mother defends her children, even if one of them is temperamental. Morality begins with consistency – tolerating written opinions that do not affect us personally, as well as those that do. The latter are much harder to accept but form the basis of true freedom. You can think what you like of Charlie Hebdo but don’t shut it up. Like it or not, we are all Charlie forever – or at least, we should be. 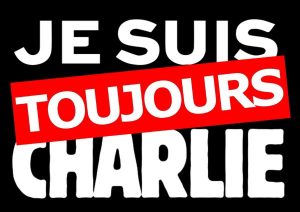