The death of UK-born Isis recruiter, Sally Jones, may be considered regrettable for one reason only. Had she been captured, she may have given us valuable information concerning the methods used in the recruitment of terrorists. Under the circumstances, though, her death could not have been avoided. So far as her son is concerned, one can argue that he was born at the wrong time, in the wrong family. However, our sympathies must end there, and we must not shed a single tear over the death of either. Sorrow and indignation would be a salient mark of disrespect for the hundreds of victims of terrorist attacks in the West. You can argue what you like as to why she ended up where she did, fighting a merciless war against the very societies in which she was born and raised. Yes, she was, in the end, brainwashed by a religion overflowing with anachronisms, inconsistencies and barbarism. However, I do firmly believe that the excuses end there, because nobody forced her to join Isis and declare a holy war on Western civilization. She made a choice that was wrong, but remains a choice, all the same.

An opinion article in the Guardian questions the legality of such a “preemptive” strike, especially considering the possible death of Jones’ son.

“The question of legality is most starkly thrown up by the death of her [Sally Jones’s] child, if he was killed. The big issue [in establishing a legal justification] is the requirement under international humanitarian law that any threat should be imminent.” The attorney general’s interpretation of that issue…was controversial.

Tell that to the victims in London, Paris, Brussels or Manchester. It seems that the West cannot win, and finds itself in a catch-22 situation. The fact that suspected terrorists are allowed to walk freely in our cities, on the grounds that they are not yet threatening, seems to reflect a contradiction in terms, namely, “suspected terrorist” and “not threatening”. Either you are a terrorist and should be dealt with accordingly, or you are not. There is no middle-ground. The security services get a ticking off, when it is revealed that they knew a lot about the perpetrators, once the terrorist attack has been carried out. It now seems, that the very same security services also get reprimanded, when they eliminate someone who is actively participating in terrorist activities. The critique is based on the legality of neutralizing a known terrorist in a foreign country resulting in limited, albeit regrettable, co-lateral damage. I would like to know what on earth are we supposed to do: keep on apologizing, and making sure that things are 100% legal, whilst recruited assassins keep on blowing us up, or running us over with rented cars? I think not.

The term Lex talionis refers to the law of retribution in kind – an eye for an eye – which allows a person who has injured a third-party to be penalized to a similar degree. It goes without saying, that interpretation of this law should be morally acceptable.This usually results in the victim receiving an estimated value of the injury in compensation, depending on the circumstances of the injury, and its long and short-term consequences. 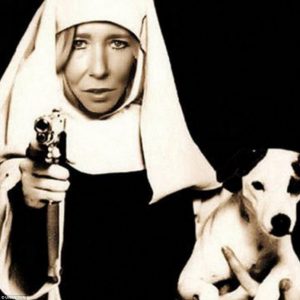 In an attempt to eliminate terrorist cells, indiscriminate bombing that causes widespread civilian casualties, must be condemned. The same cannot be said of a pin-point action, aiming to neutralize a well-defined target. Sally Jones was such a target. During her time at Isis, she was a key recruiter and was responsible for the indoctrination of women, some of whom went on suicide missions. Her elimination was on the agenda of the UK and US governments for a considerable time, both countries wanting to severely curtail Isis actions abroad. Jones left the UK for Syria in 2013 and has been acting as an online recruiter. She was also responsible for the publication of online propaganda, including a photograph of herself dressed up as a nun, and pointing a gun at the camera. You and I are the cameraman, and that’s why our governments should certainly weigh the risks of their actions against terrorists, but act quickly.

Although she was apparently trying to flee the Caliphate, it doesn’t change the fact that she was not forced to travel to Syria in the first place. Once in the grasp of Isis, there is no going back, something that one of her relatives in the UK was fully aware of, saying that, “I don’t think she quite understands the position she’s put herself in. We all have choices in life and she’s made hers.”

It is high time to face the fact that we know nothing about the true causes of radicalization, and the motives of lone individuals or terrorist groups to act in such an insane way. Our response to these dreadful acts is becoming outdated in the age of high technology and social networks. More often than not, we depict the attackers as being victims of radical Islam, and all that is inherently wrong with our societies. The truth is, that most of them actively seek radical Islam, and are far from being feeble-minded individuals becoming passive recipients of Islamic fundamentalism.

Sally Jones was such a person. Whilst in the UK, she spent most of her time online, becoming more and more pro-Iraq, in the aftermath of the Gulf War. It is online that she came into contact with Junaid Hussain, an Isis hacker, who persuaded Jones to travel to Syria, with her son, in 2013. Her son was certainly a victim of Isis ideology, but Sally Jones had made a choice to actively participate in her own radicalization.

We can discuss all day, in the comfort of our living-rooms, the “hows” and “whys” of religious terrorism. The question of whether religion is the culprit, or bygone Western colonialism, is becoming largely irrelevant when we are confronted with the daily atrocities carried out by these people. Whilst we are busy philosophizing, people like Sally Jones, are busy recruiting and indoctrinating already less than innocent souls, into committing acts of mass murder on our street corners. Drones may come in useful, after all.