All the other stuff, the love, the democracy, the floundering into lust, is a sort of by-play. The essential American soul is hard, isolate, stoic, and a killer. It has never yet melted. – D.H. Lawrence (1923)

High school student Haily Jordan wrote an essay defending the free access to guns in the US. Her main argument is that,

[…] gun control infringes upon the Second Amendment, fails to solve violence issues, and violates U.S. citizens’ freedom to own guns for hunting and sport.

Not only are her arguments the only ones that opponents to gun control can come up with, but I dare her to defend her position in front of the latest victims’ family members. It is a position that is just not tenable.

Referring to the State of California’s prohibition of guns on school premises, she aggravates the already illogical position she has put herself in by stating,

This gun control law directly impacts high school students as it makes it very difficult, and in some cases impossible, for high schools to have a trap team. Since this law will not allow schools to hold practices on campus, schools are either forced to find somewhere else to practice or not offer a trap team.

The Second Amendment that states, “the right of the people to keep and bear Arms, shall not be infringed,” forms the core of the argument advanced by opponents to a radical change in gun control laws. It is a concept that is also defended by Donald Trump who regularly reassures the American people that the Second Amendement has an assured future. The Amendment states that,

A well regulated Militia, being necessary to the security of a free State, the right of the people to keep and bear Arms, shall not be infringed.

Nobody can defend a piece of legislation that was written centuries ago when gun technology was nowhere near to what it is today. The Amendment alludes to, “a well regulated militia,” equipped with muskets instead of assault rifles, and even the muskets were not available at your local store.

But America’s gun problem is not entirely due to the widespread availability of high-tech weapons. It is more about changing the American mentality that is still deeply embedded in cowboy-country and has not acquired cultural wisdom. Whilst it is true that public outrage occurs every time there is a mass shooting, it is the only time that the anti-gun lobbyists make their voices heard, only to be subdued again until the next time by the more than powerful gun lobbies. The more they are heard, the more they are kept silent. 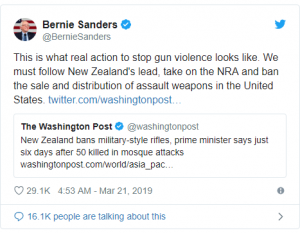 It is not only the gun lobbyists who must be defeated by brave politicians and vociferous people. It is the whole American way of life, the American dream, that must be revisited and reevaluated. America must no longer be a country where everything is permitted, where the sky’s the limit, and where moral values bow to financial considerations and political clout.

America is a violent country and the widespread availability of murder weapons is just a symptom of this inherent violence. The weapons may be available but the people must be there, ready to buy and use them. Eliminate this readiness and you will cure the illness. Before you say it – yes, there will always be the loner who at all costs will find a way to obtain a weapon.

The state of Minnesota is an American state that demonstrates the American acceptance of potential violence. Minnesota is a Castle Doctrine state, meaning that you are perfectly justified in using a weapon if you feel threatened or to prevent felony in your home or in your car.

Indeed, there are no reasons or excuses that will justify these killings but there are explanations as to why it happened. It is a violent and supremacist state of mind, bolstered by right-wing politics, that runs up and down the country, unifying the States into a sense of isolationism and usurped self-belief that there is only one greatness and it is American by nature. It is a belief that America has all the answers, harbours all the dreams – preferably white dreams that should not be interfered with or threatened from outside its borders.

Donald Trump has the answer – less immigration so that less immigrants be killed on American streets. The building of the wall is justified as a safety measure rather than a repressive one.

No single party, not one politician has dared to consider that Americans may be inherently violent. It is a trait that cannot apply to the whole country of course, but then nothing can in America because despite Donald Trump’s denials, America remains entrenched under the insurmountable depth of its heterogeneity that has turned into economic and social segregation. In claiming that the Americans are violent, which Americans are we referring to? Those in the marginalized communities who use the guns they obtained, or those in the more affluent districts who possess a gun “just in case?”

For Haily Jordan, prohibiting the access to guns would interfere with her school curriculum by threatening her trap team practice. She, like many in the US, is duped by the containment and distillation of gun violence into marginalized communities. The daily violence passes unnoticed and only gets attention in the aftermath of dreadful massacres. But considering the number of firearms present in American households, the violence we all deplore could be much worse than it currently is.