If the rumours are true that Boris Johnson is seriously considering herd immunity to combat the coronavirus pandemic, let me give him a humble word of advice – don’t. During vaccination programs, the logic behind herd immunity is that if enough people are immune against a particular human-to-human transmissible infection, the rest of the population will also be protected because the pathogen has basically nowhere to go.

Scientific data shows that for COVID-19, an estimated 60% of the UK’s population needs to be immune to the virus for herd immunity to work. That’s OK if a vaccine were available, but the only trouble is that such a vaccine doesn’t exist. If 60% of the population needs to be infected to gain immunity, that’s 40 million people. And with an estimated 2% death rate (we don’t even know what the death rate is…), you can do the maths to calculate how many elderly people, rotting at home and who caught the virus from their GP, would have to be buried.

It’s quite incredible that some people seem to say that the solution to the coronavirus pandemic is to lock old people away, let the young ones be infected regardless of the consequences and, when it’s all over, let grandma and grandpa out again, if they haven’t atrophied by then.

This sort of dangerous reasoning occults two basic principles that govern the whole of virology. The first is that viruses replicate much faster that rabbits breed, and mutate more times in a few days than you’ve had hot dinners in your entire life. Exaggerated prose, it probably is, but this is a very serious problem with viruses. In short, the virus of today may have nothing to do with the virus of tomorrow. Gabriel Leung, professor of public health medicine and dean of medicine at Hong Kong University, describes the virus’s ability to mutate and spread as “brilliant.”

In addition, it’s not the virus per se, that causes problems, but the body’s immune reaction to the infection. And have you ever tried reading a immunology textbook, to see how complicated things are? We don’t even know yet if a vaccine would be more dangerous than the disease we are trying to eradicate. 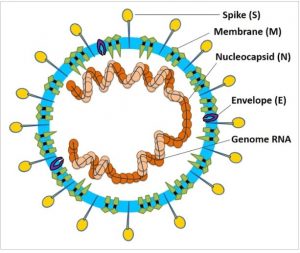 The structure of a virus is remarkably simple for such a big pest. Genetic material, an envelope, a few spikes here and there, and you have a flying little monster that’s invisible to the microscope but can ground airlines quicker than you can sneeze.

This pandemic has resulted from a single biological particle so small you couldn’t even see it with a conventional microscope. By itself it has managed to spread around the globe and cause huge impacts. We virus-watchers take our hats off to this one. It’s an extraordinary virus with immense potential, quite remarkable. – Peter Openshaw, (professor of experimental medicine, Imperial College London)

A hot favourite for Britain’s Got Talent, it seems.

But I suppose that Boris Johnson’s views on herd immunity coincide with his views on social and economic matters. It’s a case of “survival of the fittest,” and maybe next year, when Chinese delicacies have switched from bats to hamsters, we can all start again, and good old BJ will be able to test his hypothesis that is not as good as a theory but much better than a hunch, once more – if there are enough grandma’s and grandpa’s to isolate, and enough teenagers to infect.

If there’s one scientific quote that I use to cover just about everything, it’s the one French physiologist Claude Bernard said a very long time ago, when describing homeostasis,

He was referring to the internal environment of a cell that has to remain constant with respect to the outside. In other words, all over nature we observe, and must respect, a dynamic equilibrium that exists between us and them. Change it, and face the consequences. Humans weren’t created by God to eat bats, if it is proved that bats were indeed the source of the coronavirus infection.

In the meantime, the Dutch government has just announced that all schools will be closed. The decision follows public pressure on prime minister Mark Rutte, to reverse his announcement that schools would remain open. It’s taken the Dutch weeks to come to a sensible decision, much to the delight of my 15-year-old. I just wonder how many coronavirus mutations have occured during that time.

But tomorrow is another day. Tomorrow is Monday and my son will have a lie-in, whilst I worry about whether I’ll have enough face masks to last the week.

update: 16/3/20 – Dutch dentists have been advised to only treat emergencies until 6th April. At least my face mask problem has been temporarily solved.