If you think about it, the two most controversial and painful aspects of the Brexit negotiations, up to now, both concern the notion of national borders, and who can or cannot cross them. Now, we have the whole of Northern Ireland, not knowing whether it will end up with a hard border, and where the border will lie, if it does come. We also have thousands (if not hundreds of thousands) of British citizens, living in one of the EU-27 member states, who find themselves in the agonizing uncertainty of not knowing whether they will be pinned down to one particular member state, after Brexit. Both sets of citizens fully support the EU, with Northern Ireland having overwhelmingly voted in favour of remaining, and British citizens in the EU-27 having done the same – if they were allowed to vote, that is.

Concerning Northern Ireland, it seems that those who voted Brexit, are suddenly realizing that leaving the EU is actually extremely complicated. That is not to say that the EU is entirely responsible for this, because the UK has, to a large extent, contributed to EU law and regulations.

The present ideological mess the UK finds itself in, reflects its profound unpreparedness, prior to, during, and after, the EU referendum. I find it extremely hard to believe that the “average” Brexit voter (whoever he is) seriously thinks that (1) everything will get much better, on March 30th, 2019, and that (2), Brexit was going to be easy and straight forward.

It is quite obvious and unavoidable, that Northern Ireland is going to stay in the customs union, with the EU considering the province as “part of the customs territory of the Union” . This is the only way that Westminster will avoid setting up a hard border between the North and the South. If Theresa May refuses, she either has to find a viable alternative, or face the prospect of a no-deal. Unless, of course, you listen to Boris Johnson who, as foreign secretary, cannot even tell the difference between nations and London boroughs. He seems to think that the installment of a few cameras, a zebra crossing, and a cash dispenser, will be sufficient to lock the EU out of the UK’s back garden. How on earth this man got to be foreign secretary, is beyond me, and must be considered to be the third most painful aspect of Brexit, after Northern Ireland and the abolition of EU citizens’ rights.

I have said enough about what EU citizens’ rights are, and how they are so dear to all of us who decided, more or less a long time ago, to cross the Channel on a one-way ticket to happiness. However, I cannot help but notice that, whereas in the December agreement on phase I of the negotiations, the question of freedom of movement for UK citizens living the EU-27 was outside the scope of the negotiations, it has now become part and parcel of the EU draft, published yesterday.

This change of status, from being ignored by the two parties, to being “Article 32” of an officially drafted document, is nothing short of an outrageous conduct by Jean-Claude Juncker and his bunch of Brussels technocrats. A draft it may be, but the intention of the EU is crystal clear: no ongoing freedom of movement for British citizens, living in the EU-27, after Brexit. I cannot help but think that if the EU cares about its citizens in such a despicable way, it’s no wonder the UK voted to get out. 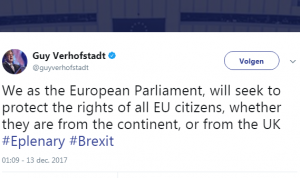 It now seems that the citizens of Northern Ireland have joined British citizens on the Continent, in being targeted by the cross-fire emanating from London and Brussels. It is both an unenviable and dangerous position to be in. It’s quite ironic and sad, that whereas everybody seems to want to protect us, we are being attacked from all sides by clauses and sub-clauses of a contract that has lost all sense of values. It’s a risky business, nowadays, being a Brit in the EU, and living in Northern Ireland.

All those years ago, I crossed the Channel with my Austin 1300, filled to the rim, with boxes and suitcases. I was full of hope for my French adventure. Years later, I became French whilst, at the same time, keeping such fond memories of the UK that I had left, but certainly not deserted. More recently, by pure accident, I crossed one bridge too many, on Amsterdam’s concentric canals, and never looked back. At the time, my vision of the EU was probably quite different from the harsh realities of the present-day Union, torn between a Brussel elite who does not care, a difficult child in the West, and children in the East, who view democratic values – let us say – differently.

The EU is right, in wanting to defend the values of the free market and customs union. Together, they form one of the founding pillars of the Union. But Brussels must not forget that, in addition to customs and markets, there are people – us. We are responsible for the Union, and the Union must be responsible regarding our citizens’ rights. Come March 2019, it is inconceivable that these rights will have been modified or diminished, with particular reference to onward freedom of movement.

In wanting to “establish a common regulatory area” in Northern Ireland, Brussels is so good as daring the UK to accept that Northern Ireland be pinned down to the customs union. If Theresa May refuses, she will have no option but to reinstate a hard border with the South, and accept the political consequences of her decision. In this matter, the EU has no choice, if it wants to continue with the free market and customs union, in their present form.

The case of British citizens, already living in the EU-27, is quite different. The EU does have a choice. Aiming to diminishing the rights of a group of former EU-citizens who legally enjoy one of the four freedoms of the Union, seems to be nothing else than a retaliatory stance, and has no justification, whatsoever.

A few months ago, the UK secretary for trade, Liam Fox, boasted that a post-Brexit trade deal with the EU would be, “the fastest in history”. That may be so, but it’s taking London and Brussels a hell of a long time to get even near being able to start dealing. And, in case you hadn’t noticed…no mention of Gibraltar, yet.