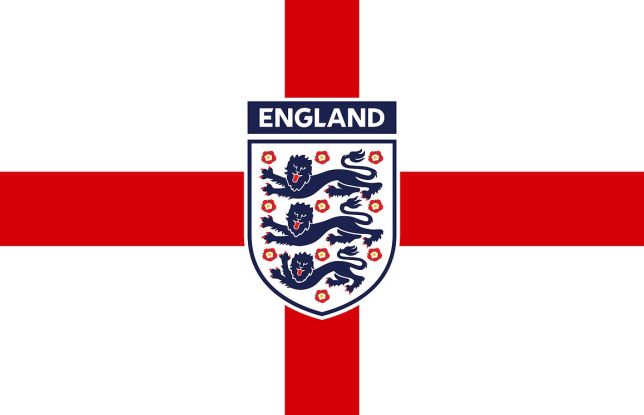 When historians look back at why the EU referendum was organized, how it was run, and what the people voted for, it will become obvious to even the average history student that the whole affair was based on lies, deceit, and misconceptions. Historians will also note that not many times in the course of history, have those in power been so contemptuous towards those who gave them power, and the latter so ignorant of the nature of the decision they were asked to take. The result is the apparition of a Brexit England that is in the hands of traders, clowns, and devils.

What is even more remarkable, is that not content with having duped the UK into leaving a union it had no real reason to leave, UK politicians continue to lie about a situation they are incapable of managing because they were not prepared for it or, worse still, because they do not believe in what they are trying to deliver. The way the politicians insist that the will of the people must be respected is akin to someone admitting to having made a mistake, but too stubborn and proud to rectify his error.

In the same way that future generations will pay for those who do not believe in climate change, the young people of the UK will suffer for leaving a union that although far from perfect, has brought more benefits than inconveniences. The union is not all about economics, but also reflects a state of mind – a state of mind that the English in particular, have lost.

Although we keep on referring to the UK as having voted for Brexit, the rejection of the EU is essentially an English problem that was fuelled by a rejection of open borders. It is strange, however, that the Welsh also rejected staying in a union from which they clearly benefit.

The Leave campaign was run by cunning politicians who found the right words and images to convince the UK electorate of severing all ties with the monsters from Brussels. Even without a credible plan, and under the guile of a prime minister who only half-believes what she preaches, these masters of rhetoric have continued ignoring the complexity of the job at hand, and consistently underestimate the task that UK companies face after Brexit. They insist on believing that the UK’s economy is tailored for life outside a block whose core values they feel uncomfortable with.

Maybe the Brexiteers are right. The UK may very well prosper after Brexit, but it will be a prosperity entirely based on a Darwinian notion of survival, where only those capable of adapting to a stream of constant deregulation, will survive. There are few places in the world where social inequalities are so conspicuous, and so widely accepted.

The wealth held by the top 10% of households is around five times greater than the wealth of the bottom half of all households combined – IPPR Report, 2018

Amongst the “Brexit troublemakers”, three politicians typify what is intrinsically wrong, if not with Brexit itself, with the mentality and reasoning that is intrinsically bound to the UK’s Brexit negotiations – Liam Fox, Boris Johnson, and Jacob Rees-Mogg. There are others, of course, but these three are at the cutting edge of “Brexit mentality.” These “three lions” have without effort become “three liars” ready to conquer the world with trade deals, where it is said that high standards will be met, and workers protected.

The free trade agreement that we will have to do with the European Union should be one of the easiest in human history. – Liam Fox 20/7/2017

Liam Fox is obsessed with setting-up complicated trade deals in record time. It has become a passion that as catapulted this “good deal or no deal” Brexiteer to spearhead the UK’s ambition of setting up free trade deals with anyone who manages to flutter paper money.  Everything is easy for him and he seems to be completely unmoved by the complexities facing a large number of small businesses.

But Liam Fox may be right. Setting up a free trade deal with countries like Canada may well be discussed over breakfast, and finalised before tea-time, especially if you carbon-copy already existing trade agreements. If Fox admits that the EU trade deal with Canada was excellent, what does he intend to do to make the UK’s trade relationship with Canada any better, after Brexit? It all reminds me of the television commercials for washing powder. A new improved powder that, “washes whiter than white,” casts doubts in my mind as to what the previous notion of white actually was.

.@LiamFox is in Canada today to discuss future UK- Canada trade 👉 #DidYouKnow total trade in between 🇬🇧 and 🇨🇦 reached £17.4bn at the start of the year pic.twitter.com/RVjuUS9ZUq

There will continue to be free trade, and access to the single market. – Boris Johnson 26/6/2016

Boris Johnson has a very unique way of concealing his lies by blinding us with his stupidity. His comments are so blatantly lacking common sense that we forget that he is absolutely serious about what he is saying, which makes what he says, technically, a lie. An example of this, is his conviction that there is no border between Northern Ireland and the Irish Republic post-Brexit. Even the most stubborn Brexiteer must have no trouble in realizing that it is within the EU’s rights to want to protect the single market that is synonymous with its very own existence. It should also be obvious that in order to have a single market, there has to be a customs union. One cannot go without the other. The UK thus faces a choice of either implementing a hard border between the North and the South that takes us back to the 1970’s, implementing a border along the Irish Sea that cuts up the UK, or accepting a customs union that is synonymous with staying in the EU.

In his analogy to cars travelling across two London boroughs, Boris Johnson seems to forget that the two boroughs belong to the same “Union”, i.e. London. 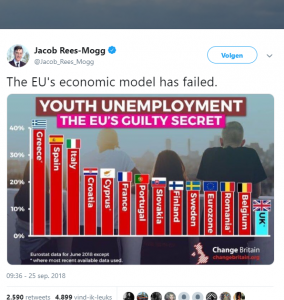 Jacob Rees-Mogg appears to be the cleverer of the three, and is certainly the most cynical. Having fathered six children, he is certainly working for the future of Britain. He gives us the facts concerning the huge benefits of leaving the EU. For Rees-Mogg, Euroland has failed abysmally, and the fault lies entirely with Brussels and its incessant stride towards the F-word, federalism.

But if I have learned one thing from reading scientific literature for the last thirty years, it is that you must be extremely careful when using statistics. The above graph emphatically shows how the EU has failed in preventing the ravages of youth unemployment. The UK stands top of the class, as shown by the table featuring half the member states. Ignoring the fact that the UK is doing well whilst being a member of a union that isn’t. For Rees-Mogg, the culprit, of course, is the infamous euro. But let us look at the same graph showing all the EU member states:

From the above table, it is clear that 15 EU member-states are not performing as well as the UK, concerning youth unemployment, whereas 12 member-states show better results than the UK.

Another example of Rees-Mogg’s wizardry with figures, came earlier this year when he approved emphatically a claim by the Sun newspaper, that food would be much cheaper once the UK leaves the customs union. He tweeted the message to his large following, but the correction that was later published by the same newspaper passed virtually unnoticed, and was certainly not re-tweeted. Of course, psychologically this false information had done its job, in the same way that a car at £10,995 is a bargain compared to the same car at £11,000. 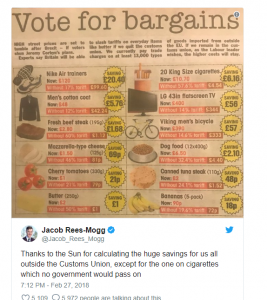 There is one area upon which all UK politicians agree, and begin to come close to a semblance of truth. It concerns backing away from the truth, for the best of them, and running scared from the truth to disappear down a rabbit hole, for the others. This is at least one domain where the UK politicians are world beaters, and…world comedians.

I can’t imagine anybody finds you funny or entertaining, especially in the NE you’re out of touch , apparently a comedian! And have no idea what it’s been like watching the systematic desolation of industry in our area at the hands of the European Union.

No, Sir, it is not the hands of the EU that have desolated industry in the North-East of England, it is Westminster and the South. Just see if it changes after Brexit. I am waiting and watching, in the comfort of my home, on the cleverer side of the North Sea.