Having had an umptienth encounter with human selfishness, a recurring question haunts my mind. Namely, why are people so selfish and inconsiderate towards others? It’s a rhetorical question in a way because I already know the answer and, if I think carefully about it, I am part of the question. But the more I think about it, the more I am convinced that if climate change doesn’t kill us, postmodernism and selfishness will.

Had the glove compartment of my Renault contained a Colt 45, I would have used it.

My latest encounter happened a few moments before beginning this post. I was stuck in a traffic jam and because it was getting hot I decided to turn back. I turned right at the first set of traffic lights and did a U-turn to then be able to turn left and head back home. Several cars had encroached the junction and one of them was preventing me from turning left. I hooted as much as I could and the occupants of the encroaching car didn’t even turn to apologize. Silly me, I thought. How could I expect people to be civil in the absence of a box junction.

As with most frustrated drivers, had the glove compartment of my Renault contained a Colt 45, I would have used it. That not being the case, I had to satisfy myself with a few swear words that always come out in French for some inexplicable reason.

Once I had cooled down in the comfort of my own home, not only did I decide to write this post but I realised that I was, in fact, part of the problem. In getting so worked up about an annoying but not life-threatening incident, I was being just as selfish as others by not relativising the situation. I had to just enjoy my privilege of being stuck in a traffic jam because so many people in the Western world cannot afford a car with airco, so many others in under-developed countries cannot afford anything at all. I was not going out on a vital mission that could not be postponed until tomorrow.

I don’t know why I travel by car in the first place because, in the Netherlands at least, the chances are that you will be stuck in never-ending traffic jams. Surely, taking public transport is better for the environment and, above all, less stressful. Well, in fact, it isn’t.

A moment of nothingness has become an era of emptiness.

Imagine yourself in a crowded commuter train carriage. Although the train is full, a distinct feeling of loneliness and, even worse, invisibility, takes you over. 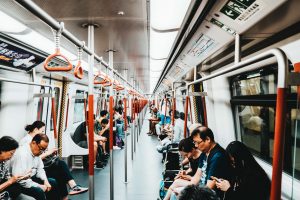 Just take a look around the carriage, for yourself. You will cast your eyes on as many people as there are ways to feel lonely and ignored. From youths who are too busy writing text messages on their cell phones, to smart commuters finishing off their latest balance sheets on their laptops. Not forgetting those who cover their ears with gigantic earmuffs, or use invisible earplugs, and trill to the sound of a song that cannot be shared. And then there are those who have an air of nothingness about them, staring at the roof or at the floor of the train carriage, in the expectation that one or both will cave in at any given moment in time. They avoid your gaze in the same fluent fashion that you avoid theirs. This is a fleeting moment of nothingness, shared in the confines of a commuter train, but spreading its wings on the whole of what it means to be human. This moment of nothingness has become an age of emptiness.

It’s all about the “Me”, really. I am the one taking up my space, and I must reflect upon others the true nature of my glory. In this way, the youths sending text messages are showing others that they have constant contact with a circle of friends who elude you. The smart commuter, typing away on his laptop, reflects the allure of his exceptional job that keeps him away from the frivolities of life to which you belong. And then there are those taken away and transcended by the intrinsic values of Spotify, cleansing their bodies from the pollution of ordinary lives like yours. 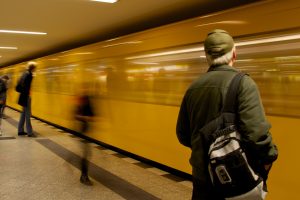 We are all trapped in this grid of emptiness. It is an era of hyper-individualism and selfishness.

Whereas modernism was all about science – understanding and coming to grips with nature – postmodernism is all about humans. Each one of us is the centre of the universe – science and reason are not.

It’s a life “à la carte,” a menu where everything is tailored for your need to express yourself and be authentic. Nothing is imposed, everything is chosen. It’s a multiple choice system in which there are practically just as many choices as there are personal situations. In choosing from the menu, we are all seeking to get as close as we can to our true selves and as far away as possible from others.

Times are new. The revolution that took place at the end of the last century and that led to a real sense of community and expansion has given way to a culture of indifference and narcissism. The standards imposed by our parents and grand-parents have been replaced by the need to destandardize and seduce – all in the name of authenticity and self-love, of being not where you come from but who you are.

The importance of individuality is such that anyone who struggles with his/her true identity that may or may not deviate from the accepted norm can find help and support in numerous associations, help-lines and support-groups. Individuals belonging to these groups can all become activists on social media and elsewhere, but the multiplicity of voices leads to a message that is dampened by the self-contemplation of those who try to emit it and a failure of others to understand and respond.

Narcissism has become depoliticised, has detached itself from the sovereign state based on anonymity drowned in a collective project. Nowadays, there is no more salient response to the emptiness of contemporary life than the “selfie” –  a self-made image of oneself. It epitomizes self-adoration in a society characterised “by a divestment from the public sphere,” (Gilles Lipovetsky in, The Era Of Emptiness, 1983) and represents the paroxysm of individuality by occulting all social interactions whilst at the same time glorifying the self. This is about the “Me,” the hypertophied “Me,” and nothing else.

Maybe we are all missing the point. We are losing sight of the endangered horizon that has become threatened by greenhouse gases. We are also losing sight of ourselves, fed as we are with empty calories, educated in empty schools, joining empty clubs, and saturated with a reality that is empty because it is virtual. This global emptiness results from a total disconnection with nature, in what we eat, how we learn, how we think, and how we act. It is high time to forget about selfishness in the name of authenticity, subjective truths, and relative morality. It is time we reconnect with nature before it’s too late.

As I sat in my car, trapped at the crossroad due to the selfishness of a driver whose action was nothing but a game, the outside temperature reached 34°C. It was quite obvious that seriously tackling climate change had been postponed until at least tomorrow. Adressing human selfishness, however, may not even be on the agenda.