Brexit instigator Arron Banks’ tweet where he jokingly writes that climate change activist, Greta Thunberg, is not exempt from a sailing accident whilst crossing the Atlantic on a “zero-emission” yacht, is yet another example of how public figures use Twitter to send the world messages that are both obnoxious and irrelevant. Banks insists that he was joking and wished absolutely no harm to a teenager who is shouting out aloud what everyone should be saying. His comments, however, demonstrate yet again a lack of judgement and a quest for sensationalism when using Twitter. 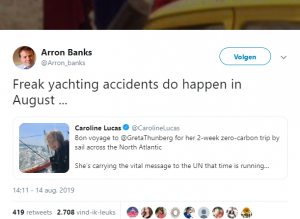 Studies show that the average lifespan of a tweet is 18 to 24 minutes – long enough for politicians and others to send a viral message that is saying absolutely nothing. Even Banks himself admits that it was a tweet about nothing and that he was just enjoying, “the ludicrous tweeter mob following the next outrage.”

The figures speak for themselves. American president Donald Trump has a Twitter account since 2009 and has amassed over 63 million followers whilst he himself follows just 47 people – members of his own family, I presume. It is clear from the tweets he sends that his sole objective is to create as much noise as possible whilst not listening to the voices of others.

Americans can do anything, go anywhere, and outperform anyone.

Nobody can beat us.

Nothing can stop us because winning is what Americans do.”

What is the deep philosophical meaning or social importance of the above tweet that Donald Trump recently posted? It only reflects what we already know concerning a president whose irresponsibility and impulsiveness outstrip his capacity to emit a meaningful and measured statement. We all know that he wants to make America great again and will probably succeed in doing so on the backs of those who are left behind by his policies and with the violent help of American white-supremacists.

Twitter has such an outreach, touching anybody and everybody with a mobile phone and an internet connection, that its effects can be devastating. A few minutes is all it takes for a couple of hundred violently written characters to infiltrate and distort the minds of those whose minds can be infiltrated and distorted.

The written word must be valued for what it is, no matter what technology is used. The propagation of a text – however short – represents an everlasting image of an idea, a vision of a dream, or the expression of reality as seen by the author of the text. But the written word can also serve to infect the already ailing minds of those who are most vulnerable to its potential venom.

It can be argued that the worst of what is written is better than the best of what is not written. But even so, care and responsibility are needed to harness the misinterpretation and distortion of a text that, more often than not, carries more power than a misplaced spoken sentence that is quickly forgotten. Even the 24-minute-tweet can be immortalized by being saved on an external computer drive somewhere in the world or being shared over the world wide web.

Twitter has become a political and journalistic tool and its indispensability must explain why it is so widely used by so many. None more so than Donald Trump who, in constantly posting tweets that hit the headlines, is not only bypassing the conventional press conference but also shaping and making the news as he sees fits. What Trump tweets, becomes news.

But what if journalists were in fact manipulating the American president into tweeting what they want to hear? A tweet from a journalist that strikes a blow to Trump’s ego will be re-tweeted and commented on by the president, to become an unavoidable topic of conversation just because he is the president. This is not fake news, but “make” news – and it is just as dangerous.