Boris Johnson was simply being himself at the Conservative party conference in Manchester. Full of energy and wild metaphors, he captured an already captive audience, sent Jeremy Corbyn into orbit and got Brexit done. All this, and more, with a panache that Cyrano de Bergerac would have been proud of and a sense of optimism that would make even the most stubborn Remainer stop worrying about impending doom.

Was this really the same Boris we all know and love, the Boris humiliated by the courts of justice, with no majority in Westminster, incapable of winning a vote or being chivalrous in his treatment of women?

This was the culmination of the sold-out sideshows, organised earlier in the week in Manchester by the infamous Bruges and European Research groups. It was a Great Mass where the already hypochondriac and paranoid faithful were now suffering from an acute bout of self-denial. But they were at one with he who preached the perceived truth that they all believed in.

It was a truth they were all eager to hear. Brexit was to be side-stepped, something to be quickly got rid of because it was more of a hindrance than a problem. Cometh what may, it will be done as the chains in Brussels will be undone.

The quest for freedom has become an irrational obsession where dissidents are silenced and political opponents sent into outer space. It is not a time for the squeamish, for the faint-hearted.

Brexit has become an epiphany where self-realization requires courage and the strength to fight against all the lies and ruses of those who object, those who oppose.

And so with swords and men, this acceptable populism descended into the streets, connected with the people to deliver their will, to deliver them from evil. The ghost of the Iron Lady was still very much present, she who had dared to speak in Bruges about Britain’s relationship with Europe.

We have not successfully rolled back the frontiers of the state in Britain, only to see them reimposed at European level, with a European super-state exercising a new dominance from Brussels. – Margaret Thatcher, 1988

She gave them the inspiration to leave a single market they had helped create, to sever the ties with institutions that they could have changed from the inside. Instead, they ignore her words,

Britain does not dream of some cosy, isolated existence on the fringes of the European Community. Our destiny is in Europe, as part of the Community. That is not to say that our future lies only in Europe, but nor does that of France or Spain or, indeed, of any other member. The Community is not an end in itself. – Margaret Thatcher, 1988

Boris Johnson assured us that he and his party “love Europe,” but judging from the reception of the audience, one can wonder if the delegates agreed with him. The problem with Brexit, Johnson says, lies in technicalities and not the potential undermining of the EU’s single market by a deregulated Britain combined with the absence of border controls in Ireland. The technicalities are, in fact, so intricate and so fundamental to the functioning of the Union and maintaining peace in Ireland, that Boris Johnson and his party have failed to understand them.

Instead of admitting his misconceptions about how easy it will be to leave the EU, with or without a deal, Boris Johnson continues to promise us but one thing – Brexit will happen on 31 October, despite Parliament having voted to prevent a no-deal Brexit. What are the chances of an extension, I wonder?

The Manchester speech was full of ideological emptiness and strange populist humour. I could not quite get myself to imagine the leader of the House, John Bercow, eating a kangaroo’s testicle. The metaphors would serve nothing less than encourage Brexiteers’ uncontrollable anger against Parliament. In terms of concrete policies, Boris Johnson was just repeating what so many other leaders have said before, and so many more will say well after he has left.

It is a universal fact that no matter where we live, we all want better schools, better hospitals and increased security on our streets. But concrete answers are few and far between, away from populist rhetoric and broken promises. Cutting taxes and spending more on public services is a well-used political theme whose popularity and efficacy have not diminished with time. It lacks the answer to the simple question regarding the funding of such policies. All that Boris Johnson could do is blame his predecessors whilst getting his facts about public debt absolutely wrong. 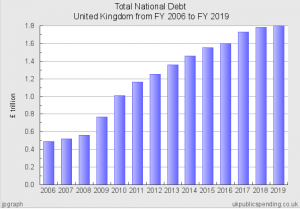 The people may well have had enough of experts, but there will surely come a day when they have also had enough of “Punch and Judy” politicians.