Mesmerised by a violet vision, I stopped to gaze at the patch of sky whose power I could feel from the roadside. I clutched at my heart but felt no beat, and wondered what enchanted forces had brought me here, what mellow sounds had enticed me. But there were no sounds, not even whispers, and as I tried to speak to absent sirens, my words were enlaced in the mist, weaving their way across burned blades of grass, to be dissolved by the crystal dew.

This was what I had been waiting for. But was it yesterday? Or tomorrow? I no longer remember the dusty trails left behind by never-ending time. The hour and the day did not matter because the vision that captured me went far beyond the last boundaries of time, transcending all perceptions I may have had of what was day and what was night. 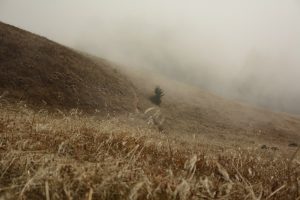 As I slowly advanced into the never-ending field, the purple light got stronger and my footsteps were heavy. I felt as though a weight had been added, not to my body, but to my soul. Was this the final explanation of what it means to be human, and the answer to all my questions? There was no going back, no second chance or time for reflection. This was a one-way ticket for a destination I did not understand but whose power of attraction went far beyond what I had ever imagined.

There came a point where I could advance no more. Dimly lit rocks that harboured murky waters were blocking any way forwards. As I stopped to look around me, I felt certain that I was not alone. But I could see no one or feel the movement of air around me that would have pointed me to her. But She was there, sensing every emotion that traversed my body, every thought that entered my mind. 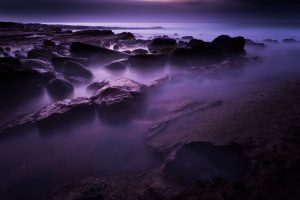 It was at this moment that the ticking started, endless beats that pierced my skin like needles and sent shivers down my spine. This was not how it was supposed to be or to end, I thought. But the beats continued and the simple harmonic motion that I saw before me separated the rocks sufficiently to open up yet another endless field. It was time for me to move on.

I was now in the centre of what I saw whilst walking down the country road. I had reached my destination but was still alone. She had to be there because there was no other explanation for the vision I saw and was now part of. I felt her presence more than before. She was beside me, invisible and present, dictating my every feeling and pushing me forward in a way that only She was capable of – unnerving and unreal. If only She could speak to me, and tell me where I was going and why. But She kept her silence and I felt a sense of helplessness invade me because I knew that I would end up in the epicentre of the violet luminosity but did not know the reason why. 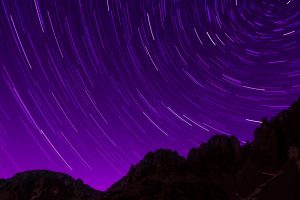 My voice had failed me and I wanted to shout but knew no longer how. As I began to panic, my feet were hovering above the ground. I kept on advancing despite not being able to walk, my hands attached to a thread of Ariadne leading all the way to the rock. I had not seen the rock before but it was now visible through the clearing mist.

What I thought was a single rock, consisted of two gigantic pillars that extended from the ground upwards to eternity, beyond the mist and the clouds. The wind began to gather strength, whirling its way upwards along the rock face, swaying both threads that were now firmly entangled around my hands. 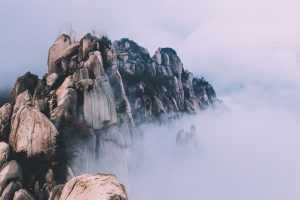 I felt the cold but, above all else, I felt the fright that was taking me over. Was this the entrance to Hades and did the river Styx lie behind the pillars? I began to think about the things that I may have done to deserve this and could come up with no deed that was evil enough to merit a journey to the Underworld. Besides, I didn’t even know if I was dead. 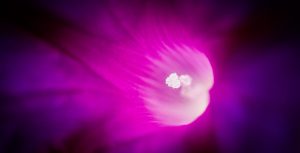 The threads stopped pulling me and I was left stranded, a few feet in front of the rock. A thundering noise echoed across the field and the two pillars began to part, allowing the intense violet light to illuminate my surroundings and reveal an infinite empty field.

As the pillars opened, a thin silk curtain masked what appeared to be a violet flower reposing on a pedestal. I had reached the source of the vision and hoped that my questions would be answered.

The curtain opened completely and I could admire the omnipotent flower in all its glory. I had finally encountered She. Half-flower-half-soul, She had risen from the earth and descended from the heavens.

“Yes,” I replied in a trembling voice that I had recovered. 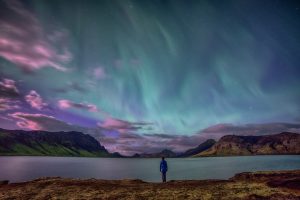 I finally understood what had brought me here, why time had stopped and why I was talking to an extraordinary violet flower. I had encountered the true essence of philosophy, an essence that has always taken precedence over our existence and, despite our actions, will continue to do so until we vanish from the universe.

The light changed from a deep and threatening purple to a discrete tone of blue. As it got lighter, I could distinguish the banks of a river and the two cliffs that lay on the other side. The pillars and the rocks had disappeared, and I knew that the river was there to be crossed. I was destined to reach the other side.

“Let us not destroy this essence by favouring selfish existence,” She continued. “Through the essence of Philosophy it is up to the children to save the planet that has been compromised by the existential actions of adults. But in doing so, the children must make sure that they do not become reflections of the adults they are replacing.”

I finally knew why I was here and a sensation of peace and serenity flooded my body. I felt my feet touching soft blades of crimson grass and was no longer prisoner of the thread of Ariadne. The two pillars that had once enclosed the omnipotent flower had sunk into the ground and had become the banks of a river.

Indeed, I knew where my final destination lay and how to get there. My childhood was over and I was no longer an adult.

The bright violet light diffused into the morning clouds and the Lady of Philosophy disappeared into the heavens without a sound. All that remained to do, was for me to cross the river.