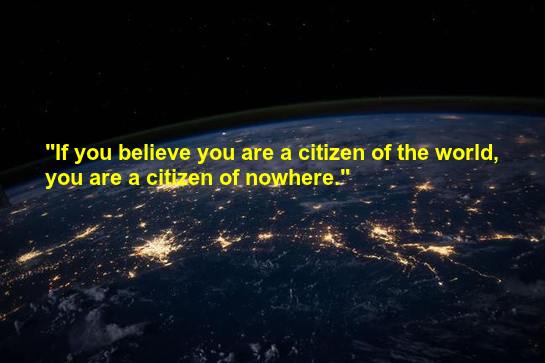 Never underestimate the power of words because their psychological impact can be quite disturbing. The day after the EU referendum I felt, like many, that my whole world had changed. Having been born in the UK where I obtained my professional qualification, moved to France in 1984 and living in the Netherlands since 1999, my life and identity have always revolved around European ideals and EU laws and rights.

If being plural is a sign of nothingness and belonging nowhere, then I am proud to be a void.

My first reaction to the referendum result was one of profound sadness mixed with selfish worry. I was worried that my UK degree that allowed me to work all over the EU would suddenly be questioned or subject to restrictions. My profound sadness was related to who I am, but not self-centered in a selfish sort of way. It arose due to the fact that what many of us believed in – freedom of movement – was being jeopardized by a vote, the result of which had little to do with the question posed. In short, I and others were being punished because many UK citizens did not like the way they were being governed, partially by Brussels, but mainly by London. The EU is, for most who voted Brexit, a scapegoat that had to be sacrificed to hope for a better future.

I have written at length about freedom of movement and how it is becoming an endangered concept for all of those who are affected by Brexit. But my sadness turned to anger the day Theresa May delivered her speech at the Conservative party conference that followed the referendum. Her single sentence may have been directed against those who fly first class from London to Nice and drive to Monaco in an open-roof Bentley, but it affected me in a way that few sentences can. Theresa May succeeded in driving a wedge through my personality and created a divide that I can no longer repair.

The world is not a state, of course, and that being so, we cannot have world citizenship. In a certain way, however, we are all citizens of the world, having to respect, and abide by, the laws of nature.

Strictly speaking, citizenship is nothing but an administrative status, a name in a register that tells others not who you are, but what you are. Theresa May’s unfortunate words were questioning who I am and the right I have to be more than one, to be plural.

My dual citizenship was not forged with time to become part of who I am, in the way that my dual identity was. My citizenships are tools that I can use to participate in the societies to which I belong, or once belonged. For Theresa May and her predecessors, citizenship is something that you can tamper with by taking rights away, the right to vote for example. In not being able to take part in UK elections and being disenfranchised for the EU referendum, UK governments have done nothing else but add a tinge of nothingness into my UK citizenship. I can just about put up with having an amputated citizenship, but let her not cast her insular judgement on my identity.

When Boris Johnson met Jean-Claude Juncker and Michel Barnier in Luxembourg, he quoted Ian Paisley by saying that, “The Northern Irish are British but their cows are Irish.” Barnier corrected him by replying that the Irish cows were, in fact, European. In the past, Boris Johnson has publicly stated that all migrants in the UK should not only learn English but also feel British. He obviously knows nothing of how it feels to be part of two cultures, however similar they are. Whereas the acquisition of your adopted country’s language is paramount, the feeling of citizenship is not. In fact, it’s quite the contrary. My experience from having been raised in two cultures and moving to a third, is that you can love a country without feeling its citizenship.

Citizenship is all paper, something you can easily throw away. Identity is all about emotions and is there for keeps. It is what and how you eat, how you sleep, what you listen to, read and above all, how you think and reason.