This post is going to be sexist and…short. Having seen a picture of The Queen in an upmarket newspaper, I ask myself the following existential question – what the hell does she carry in her handbag? I admit that I used to walk around the street with my own personal handbag – a doggy bag – until the day I got it nicked in Paris. It was a dreadful experience and luckily my Parisian cousin was able to help me out because I had lost everything, car keys, house keys – the lot. The experience has taught me to fill my pockets with the bare essentials of life and if there is no space left, my jewelry stays at home. 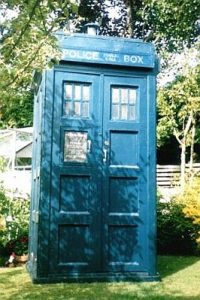 A woman’s handbag is living proof that, somewhere out there, exists an extra dimension where what you see is not what you get. Akin to Doctor Who’s Tardis, the handbag is much bigger on the inside than it is on the outside. How else can she have a week’s survival kit in such an enclosed space and still have room for sunglasses? It has something to do with “transdimentional engineering,” a discovery of the Time Lords, according to the Doc.

But enough about my personal dilemmas and Time Lords, what about The Queen’s handbag? It’s not as if she has to carry her car keys, the keys to the Palace or an identification document. Can you imagine a police officer asking her for an ID? 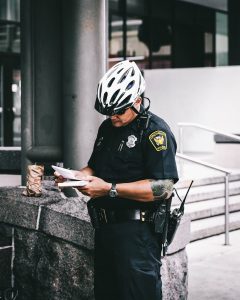 I don’t care if you’re the Queen’s Mother, Love. “No parking means No parking!!”

But what sort of personal items can she carry with her?

Apart from the usual stuff like lipstick, a pair of scissors, make-up, nuckledusters and pepper spray, the chances are that The Queen will have a packet of Kleenex from Tesco’s or a hand-braided handkerchief that once belonged to Queen Victoria, in case she gets a runny nose.

According to Hello magazine, the handbag is, “the faithful, ever-discreet companion of a woman who lives her life almost entirely in the public eye. The Queen’s sturdy yet elegant handbag has been at her side for decades now, becoming an iconic symbol of her royal style. As for its contents, they’re a source of endless speculation.” The Queen’s handbag is said to contain a crossword puzzle cut out from a day-old newspaper so The Queen has all the answers, a packet of biscuits for her corgis and…a penknife. The latter is a good example to be set in light of the rocketing numbers of knife crimes occurring in London. 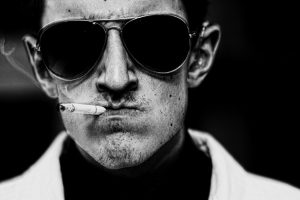 I’m prepared to f**king use mine!!

When the Queen places her bag on the table it means she wishes to take her leave in around five minutes, while putting it on the floor tells aides to speak to a guest or move them along the table. – Hello Magazine

I’ll have to teach my 14-year-old some manners. When he wants to go home, he starts banging on the table.

I’m glad to have learned that Her Majesty doesn’t carry a mobile phone in her handbag. Nothing is more triste that seeing a group of girls sitting at a restaurant table communicating with each other via WhatsApp. If The Queen does need to communicate, she positions her bag in a certain way and her staff knows exactly what she wants.

So, the next time you see Her Majesty with a handbag on her head, you can bet your bottom dollar that the Royal Lady wants to call it a day and lock up the Palace for good – if she can find her keys, that is.