If ever a ranking of ordinary-looking houses that possess a universal value were made, the building situated at 38 Oudezijds Voorburgwal, in the centre of Amsterdam, would probably be near the top of the list. Whereas the Anne Frank House, situated on the nearby Prinsengracht, symbolises all that is bad about human nature, this house epitomises the good side. It also proves that what is not seen, is much more easily tolerated and accepted than what is. This is particularly true of religion, which is, and must remain, a personal and private experience. 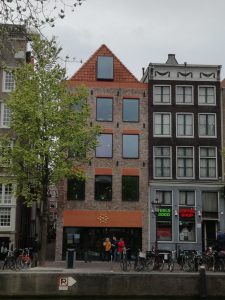 The building, which resembles any other along the canals of Amsterdam, is the home of one of the most amazing places of worship in Europe, if not the world.

38 Oudezijds Voorburgwal is, at first glance, just a lavishly furnished 17th century house, reflecting the wealth of Amsterdam merchants and traders, during the Dutch Golden Age. However, having passed narrow corridors and climbed steep stairs leading to the attic, one comes face-to-face with something quite extraordinary – an entire Catholic church. The name of the church is Ons’ Lieve Heer op Solder (Our Lord in the Attic). It is one of the few religious buildings that even non-believers, like myself – I do not like the word “atheist” -, cannot but stand silent in admiration. I have visited the church twice and, even the second time, I remain quite amazed that such a place could have been built in an attic. Once inside, I am deeply aware of the significance of the church in its historical context. One can almost sense the relief and appeasement of the worshippers who had found a sanctuary for their beliefs.

The church dates from 1663. Although it was not permitted for Catholics to celebrate mass publicly, the Dutch authorities seemed to “turn a blind eye” to what went on in the privacy of one’s home. Whereas the rest of the world was busy burning witches, William of Orange was advocating tolerance.

a) :sympathy or indulgence for beliefs or practices differing from or conflicting with one’s own , and

b):the act of allowing something.

The biological definition of tolerance is also interesting. In immunology, tolerance is defined as a state of non-responsiveness to a substance or an aggression.

It can be argued that the Dutch, although allowing Catholics to practise their religion, were not being tolerant in the true sense of the word. Some would even go so far as to say that the tolerance of Catholics was more akin to segregation, than actual tolerance.

For the Dutch, tolerance has never been synonymous with laxity. In the 17th century, many were frightened that allowing Catholics to openly practise their faith would harm or even destroy Dutch society. These views were taken seriously by the Dutch authorities. Others however, preached for the absolute freedom of choice concerning religious practices. They were also listened to, and the wishes of both were satisfied. The Catholics were able to practise their faith, albeit behind closed doors.

This atypical form of tolerance could best be described as “pragmatic” or “applied” tolerance. It has always been one of the characteristics of the Netherlands, and is still very much a part of present-day Dutch society. The Netherlands is seen by many as being a land where the art of compromise, the bringing together of opposing views and adapting a practical solution that will satisfy all involved, is part of the country’s way of life. Two famous examples, of course, are the government’s attitude towards prostitution, with the legalisation of brothels,  and soft drugs consumption legalisation in the world-famous “coffee-shops”. The reason why the Dutch are so tolerant, when compared to other countries, probably arises from the fact that they value freedom more than most. The Netherlands has been under the constant threat of water for centuries. The 1953 flooding which claimed more than 2000 lives, is a potent reminder of how precious freedom is, how fragile life can be, and of how both should be protected. It is a reminder, too, that although creation itself is infinite, we are not. So why not make the most of it, so long as your own freedom doesn’t interfere with anybody else’s.

The building comprising the church has been carefully maintained over the years, and is now the second oldest museum in Amsterdam, after the Rijksmuseum. In 2015, the museum underwent an extension, acquiring an additional building and a new entrance. An interesting development took place in 2016, with the founding of “Voices of Tolerance”, a project supported by UNESCO and directed at secondary school children.The aim of the project is to make young people more aware of what tolerance actually is, and how it influences everyday life in the Netherlands. The school children can interact with each other in discussion groups, and listen to presentations given by teachers and invited guests. In November 2016, the museum participated in the International Day for Tolerance, by inviting the mayor of Amsterdam and a police spokesperson to participate in the activities.

It is of paramount importance that we teach younger generations the intrinsic values of tolerance. We live in a world where intolerance and its associated verbal and physical violence are increasing daily. Although we were all relieved by the relatively poor showing of extreme-right-wing politicians, such as Geert Wilders in the Netherlands, and Marine Le Pen in France, we must not forget that their share of the vote increased when compared to results of previous elections in their respective countries. In the UK, the referendum on continued membership of the European Union turned out to be a referendum on immigration. The history books will remember the image of Nigel Farage, standing in front of a poster featuring thousands of dark-skinned men, women and children, with the caption “breaking point”. The history books will also remember the brutal murder of Jo Cox, a politician defending values of humanism and tolerance. What do we tell her children, and what will they, in turn, tell their own children?

The strict separation of church and state is a prerequisite for a free and open society. There should also be a strict separation between one’s religious beliefs, which must remain private, and one’s appearance which is publicly visible. I believe that this is the only justifiable argument against the wearing of religious clothing and visible ornaments outside the private sphere. However, whether or not these religious symbols should be banned from the public sphere remains a contentious question. If we apply a strict definition of tolerance, the argument of not allowing the wearing of religious clothes loses most of its validity. It is morally right to tolerate a belief that we consider  wrong or bad, so long that it is not intolerably wrong or bad. There is a subtle but distinct difference between the two. In this way, arguing that the complete covering of one’s face with religious clothing would endanger the security on the street or in public buildings and schools, can be seen as a valid argument. The reasons for rejecting the freedom to dress religiously are thus stronger than the reasons for its acceptance. If, however, the sole reason for not tolerating the expression of one’s religious beliefs is that we live in a secular society, it is intolerance that is being expressed, and not justified rejection. The populist views, expressed by Geert Wilders, calling for an immediate closure of all mosques in the Netherlands can clearly be classified as intolerance, not as justified rejection. He is not the only politician preaching intolerance against Islam. Similar views can be publicly heard all over Europe, and not forgetting, on the other side of the Atlantic, the most powerful president in the world. It is a duty for all our secular societies to protect minorities, and this include religious minorities. By publicly promoting Islamophobia, we are not only discriminating against a religious minority, but also playing into the hands of terrorist groups and religious fundamentalists. We need, more than ever, a practical middle-ground solution akin to that which took place in the Netherlands, four centuries ago.

A Beacon Of light

The tolerance that was present in Dutch society in the 17th century, is the same tolerance that should be present today. With globalisation and tremendous advances in communication and travel, the world is much smaller now, than it was then. Our world, however, has become a dangerous place, and certainly not a place for demagogy and bigotry. We must mutually accept and respect each other, and fight the true challenges that we face, such as climate change, poverty, and religious fundamentalism.

Ons’ Lieve Heer op Solder, a Catholic church hidden in the midst of Dutch secularism and Protestantism, is not a wonderful relic from the past, but a beacon of light for the future. It represents the one true universal “religion” that is worth fighting for – tolerance.