When I was a child, I used to cry my eyes out on Bonfire night. I was terrified of fireworks and had to stay inside and watch behind the safety of a closed window.

For those of you who may not be familiar with this, Bonfire night or Guy Fawkes night, is celebrated in the UK on the 5th November. People light up bonfires, burning a Guy Fawkes effigy, and then set off fireworks (that’s the bit when I start crying…).

Guy Fawkes was a member of a group of Catholics who plotted to blow up the House of Lords during the State Opening of Parliament, in order to assassinate King James I, and put his daughter on the throne, as a catholic monarch. Needless to say, they failed.

I don’t know about you, but I don’t think that he was very handy, because even at his execution, he managed to fall from the scaffold and break his neck. Well, at least he got his name in the history books. Not many people know this, but he wasn’t the actual instigator of the plot. He was just supposed to look after the explosives and then set them off. I mean, how could someone so clumsy be the brains behind such a deed? 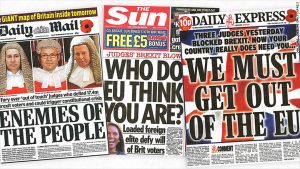 Ironically, many of those who voted Brexit, would have liked to see the Houses of Parliament blown-up. Gina Miller and her friends got a lot of stick for insisting that Brexit be debated in Westminster. The decision was upheld by the High Court, with the three judges, qualified as being “enemies of the people”.

Well, if you ask me, I really don’t know what these people want. In the name of democracy, they wanted to by-pass the very institution that the Brits have been defending for donkey’s years.

To be perfectly honest though, Guy Fawkes and his comrades in arms were targeting the King, and not Parliament per se. Furthermore, the plot was carried out by a European “Superstate”, the Catholic Church, trying to rid the Brits of their Protestant independence.

Guy Fawkes tried to blow it up and Theresa May tried to mute it. It’s really a case of sparks and larks in the City of Westminster.