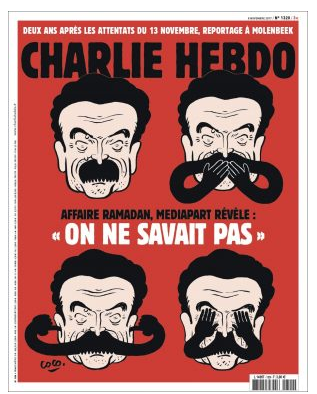 At the time of Hurricane Harvey, Charlie Hebdo’s cartoon, featuring Nazi’s drowning in Texas, with the caption “God exists, He has drowned all the Nazi’s in Texas,” provoked a mis-directed world-wide outcry.

The latest controversy will probably cause much less international hysteria – if at all – but is even more important to put right, than the Texas outburst. The condemnation has come from Edwy Plenel, the founder of Mediapart, an influential French investigative news website. Plenel’s critique, aired on French radio, severely questions our basic right to criticise Islam, and to reject and fight Islamism. Furthermore, it transforms caricature and satire – which, together, define Charlie Hebdo and, to a large extent, our Western freedom – into an act of war. Are Islamic terrorists really acting in self-defence?

Charlie Hebdo’s “front page” is part of a more generalised campaign… a war against Muslims and the demonization of everything concerning Islam and Muslims – Edwy Plenel, Nov 2017

This non-sensical attack on a perfectly legitimate and harmless member of the press, cannot go unchallenged. We must not forget that when he was editor of the world-renowned “Le Monde” newspaper, Plenel changed dramatically the editorial line of the paper, into one of incessant investigative criticism of the French elite. As founder of Mediapart, he was also, with his publishing team, responsible for bringing in the open, several politico-financial scandals, including the Bettancourt affair (2010), the Cahuzac case (a finance minister convicted of tax fraud), and presidential candidate Sarcozy’s campaign pocket-money, given by the more than generous colonel Gaddafi, in 2007.

The present feud between Plenel and Charlie Hebdo, whilst seemingly blown out of proportion – possibly by both sides, but certainly by Plenel – relates  to another brilliantly provocative cartoon, if taken in context. It depicts 4 drawings of Plenel’s face, 3 of which have his moustache covering his mouth, ears, and eyes, respectively. The cartoon bears the caption, “we didn’t know.” Charlie Hebdo is alluding to the fact that many of the investigative prowesses of Mediapart made it clear that it was incomprehensible that, for many scandals, the political elite – and just about everybody else in France – were ignoring, or had no knowledge of, what was really going on. 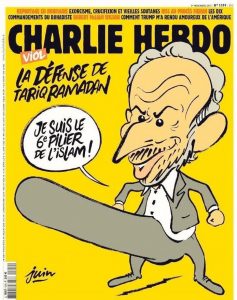 The publication of the cartoon follows that of an even more provocative cartoon featuring the very influential Swiss-born, Islam “philosopher” (do note the inverted comma’s), Tariq Ramadan, who is related to Hassan al Banna, founder of the Muslim Brotherhood, in Egypt. Ramadan is accused, by a growing number of women, of sexual harassment and/or rape. In particular, Haden Ayari – who quit Islam – filed a complaint to the police, asserting that Ramadan “jumped on me like a wild beast” in a hotel room – a story that has been published. The cartoon depicts Tariq Ramadan as, “the sixth pillar of Islam”.

It is not for me to judge if Tariq Ramadan is guilty of sexual harassment and rape. What I can say is that anyone who is slick, articulate, convincing when he speaks, resembles more a pop star that an intellectual, and preaches hard Islam, doesn’t get my vote of confidence.

Ramadan is certainly a shady character. In 2009, he was fired by Rotterdam’s city council – where he was an integration advisor – for also working for Press TV, an Iranian television news channel. Be that what it may, he has certainly “got on the wrong side” of at least one French journalist, Caroline Fourest. She has been following Ramadan’s discourse for years, and although it seems hard for me to ascertain whether she is right in “condemning” Ramadan, she does have the merit of questioning the morality of his stance on Islam. There is no doubt, from what I have seen, that Ramadan is an extremely talented orator, and has no problem in getting out of potentially tight spots, in front of a live television audience. The question that Fourest is asking, is whether Ramadan really is an Islam intellectual, advocating a liberal and modern Islam, or a polite and clever Islamist.

I want to take as an example, Tariq Ramadan’s views on the implementation of sharia law, and the Islamic veil. I’m going to be very honest about this, and describe myself as part of the people who – rightly or wrongly – do not know much about sharia law. If Ramadan is who he says he is – a bridge between Islam and the West – I am sure that he can explain to me what sharia law implies, and how it is applied, at the present time. I also want to hear from someone who is “full of beans”, when it comes to practising Islam. My ignorance is nothing to be ashamed of, because, apparently, I am not the only one who knows nothing about sharia law.

Before I even start listening to what Muslim activist,Yassmin Abdel-Magied, has to say about sharia law, there is already something that I do not understand. She claims that Islamic women got equal rights well before the Europeans, and that Islam is “one of the most feminist religions“. Yet, when I open the Quran and look up what is says over women, I come across the following,

The male shall have the equal of the portion of two females.  – Quran 4:11

And call to witness, from among your men, two witnesses. And if two men be not found then a man and two women.  – Quran 2:282

Following the heated exchange, Abdel-Magied, posted a video, explaining what sharia (she doesn’t like the term “law”) means to her,

If I understand correctly, sharia is a sort of “guide to Islam”, and helps you in your personal relationship with God. Tariq Ramadan seems to agree with this view, when he states that the goal of sharia is “to reach a rich objective,” and that,

The literary interpretation of the law, forgetting the way, is contradictory with the objectives of Islam.

Ramadan’s insistence that punishment, as advocated by sharia law, “should be “suspended” in order to allow a critical analysis of the texts,” and not be banned, is cause for concern, to say the least. What he is effectively saying, is that we should temporarily suspend the horrors of punishment under sharia law, study a few lines of text, and then calmly decide whether we should carry on cutting off someone’s hand, for having stolen a packet of crisps from a supermarket.

The male thief, and the female thief, you shall cut their hands as a penalty for what they have committed, and to serve as a deterrent from God. God is Dignified, Wise. – Kuran 5:38

What are we going to possibly discuss here? Whether a hand must be cut (i.e. wounded) or severed? In both cases, the mere fact of interpreting something so immoral, in order to see if there can be some point of agreement, is itself, immoral.

The compulsory wearing of a headscarf is not mentioned in sharia law, and its enforcement varies from country to country. Abdel-Magied is right when she says that these differences are driven by culture. What she forgets to mention, is that culture and religion both comprise shared values and beliefs, and that the one relates strongly to the other. Abdel-Magied mentions the fact that she is not wearing a “conventional” headscarf, and that Muslim women do have the choice in what they wear, including not wearing a headscarf at all. If I listen carefully to Tariq Ramadan, it becomes clear that this “choice” is not as obvious as one might think,

Let us say that some Muslim countries “recommend” that the veil be worn, more than others – maybe reflecting a subtle difference between Islam and Islamism. It does make me think that, even for a “moderate” like Ramadan, women may well escape the “oppression” of society, only to find themselves entrapped within the “liberation” of religion. Ramadan’s remarks remind me of Plato’s dialogue, Euthypro. In the dialogue, Plato poses the question of whether an act is righteous because it is approved by the Gods, or approved by the Gods, because it is righteous. In the first case, the act is relatively righteous – in relation to the “whims”of the Gods. In the second case, the act is intrinsically righteous.

For Ramadan, Abdel-Magied may have a choice over what she wears, but this choice is dictated by her act of faith. I’m at a loss, here – is the headscarf obligatory, and at the same time an act of liberation? If it is meant that the oppression is, in fact, the sexual desire of men, this gives us a glimmer of hope for the future. All of us men have to promise to abstain from glaring at a woman, outside our home, and we can do away with Islam, altogether.

I’m being sarcastic, of course, in a Charlie Hebdoish sort of way. This is to be expected, when you have a mix of French Republicanism, and an English sense of humour. I do assure you, that I have tried to understand, as best I can, the difference between Islam and Islamism, concerning the application of sharia law, and dress code. I get the feeling that my understanding of certain aspects of Islam, is still full of contradictions and uncertainties, even when “enlightened” by a jovial Muslim activist, and a charismatic Muslim intellectual. I maintain my view that Islam – like the other religions –  must remain a deeply personal experience, and not interfere with the freedom of others, to believe in something else, or not to believe at all. Nor must religious signs be visible  in public, in keeping with the private aspect of religious beliefs.

Muslims want a personal relationship with their God – and so should it remain. As for the difference between Islam and Islamism – I don’t understand that either, the latter being intrinsically derived from the former. They differ only by a subtle interpretation of a written text, based on the words written by someone who could not read or write.

It does seem to me, that Islam and Islamism are both desperately trying to create a uniform world, rather like a chocolate factory – turning smooth and rich chocolate dough, into hard blocks. Luckily, there is one aspect of Islam and Islamism, that I do understand – they both violently throw a Charlie Hebdo cartoon into the rubbish-bin.