I thought that I could peacefully finish the day, away from Brexit and Facebook, when I accidentally came across the following tweet from a leader of a Western democracy whose shoulders are probably hurting from the weight of responsibility that they carry. The tweet is so full of self-contemplation, disregard for others (bordering on contempt), and reflects such an inflated valuation of the true worth of her own country, that I found it hard to believe that such words could come from a UK prime minister who preaches compromise and dialogue. 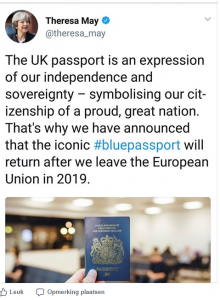 This is not about politics or economics and certainly not about the EU. This relates to a state of mind, beginning to prevail in a country that is increasingly becoming obsessed with its own values. It no longer matters whether the values are right or wrong. The fact remains that the UK is coiling up on itself, like a spring, and runs the risk of implosion in the very near future.

No one can predict what will happen in the future and only time will tell if the UK benefits from leaving the EU. What I can say, though, is that when a prime minister gets euphoric over an identification document, times are bad. The hand that brandishes the “iconic” British passport, of years gone by, reminds me of another piece of vintage footage showing Neville Chamberlain stepping down from a plane with a piece of paper in his hand. He brandished the paper several times whilst proclaiming “peace in our time.” Of course, the two situations are dramatically different, but it is not far-fetched to think that Theresa May is also proclaiming something that the history books will describe as utopia – namely, her vision of “prosperity in our time.”

In the physical world, nothing is bigger than the sum of its parts, and nations are no exception. The UK has become one of the world’s leading nations thanks to its indigenous population but also thanks to others. It is these “others” that those who voted they way they did in the EU referendum, should respect and not insult. By consciously over-rating the intrinsic value of the revived British passport, Theresa May is not only casting a dubious eye on all foreigners who live peacefully in the UK, but also on all citizens around the world who do not have the divine right to live in the UK. These include her own citizens who, like myself, have decided to live their lives beyond the shores belonging to Britannia. The UK is an exquisitely wonderful country but is certainly not God’s gift to this world.

It is high time that a large proportion of UK citizens – and the vast majority of the ruling classes – woke up to reality to discover that an equally important world exists beyond the white cliffs of Dover and may continue to evolve without them. The UK must realize that it is in danger of becoming like the US, whose vast population – despite its origins – seems to think that the world that matters is limited to a stretch of land between New York and San Francisco. They ignore the fact that in the seventeenth century, a Dutch settlement was formed at the southern tip of Manhattan Island and formed part of the Dutch Republic. San Francisco, too, has a European history, being part of the Viceroyalty of New Spain, until its independence, in 1821. I am certainly not condoning European colonialism, but history has taught us that defining the true identity of individual nations is no easy task.

Those who say that Britain defended, single-handed, the rest of Europe from the Nazi’s, and can thrive by itself, should study more carefully the history books. Without the help of the French resistance, Canada, Russia and, of course, America, the outcome of WWII might have been quite different. It may even be legitimate to suggest that the narrow stretch of water, separating the British Isles from Continental Europe, is the single most important factor that protected Britain from a German invasion. Of course, this is not to dispute the fact that the British fough heroically what seemed to be, at times, a single-handed battle against the Nazi’s.

Despite my enthusiasm for the EU, I will be the first to admit that it is far from being perfect. The EU institutions have become like giant elephants who trample everything in their paths, including the sense of national identity, so important to all of us. But the fact remains that the EU has maintained peace in a war-torn Europe for 60 years. Even today, European ideals seem to be holding dangerous nationalist parties in check. But the threat of nationalism is still very much present.

It is up to our politicians to do all they can, to curtail the temptation to give populist parties the opportunity of participating in national governments. Not only must politicians propose and implement policies that benefit the greatest number of citizens, but must also avoid the dissemination of inflammatory discourses and dangerous rhetoric. By posting her tweet, Theresa May can certainly be found guilty, on both counts.