Nigel Farage, former Ukip leader and Brexitmania guru, seems very confident that a second referendum would lead to a massive vote in favour of the UK leaving the EU.

I think if we had a second referendum on EU membership we’d kill it off for a generation. The percentage that would vote to leave next time would be very much bigger than it was last time. – Nigel Farage

If you ask me, I don’t think that Farage has sufficient reason to feel that the result of this hypothetical second referendum, would be such a forgone conclusion.

Apart from giving me a second chance of not being able to vote, Farage would run the risk of ending up with egg on his face, should he get his way.

One of the hallmarks of the referendum was that a lot of younger voters, who were favourable for the UK to remain in the EU, didn’t vote, due to lack of interest, not being smart enough to find their way to the polling booths, or too busy killing the bad guys, on their playstations. They would probably not make the same mistake twice, having received a sharp dose of reality on 23rd June, and would turn up to vote in numbers, and probably in pyjama’s.

The same cannot be said for the Leave camp. We can assume that a non-negligeable proportion of the elderly, who voted Brexit, will have either passed away, or be confined to a better life in the comfort of their four-poster beds, in the middle of Yorkshire, or in an understaffed NHS hospital.

One must also take into account the Brexit voters who have lost their bearings, or their balls. Let me explain, lest you think that I’m being common.

Those having lost their bearings, voted leave on the premise of acquiring a quiet life away from the EU, void of foreigners, and without the possibility of having to fork out an extra ten quid, for a visa, when they take their yearly trip to the Spanish Costa. The fact of the matter is, that these voters just didn’t know what they were voting for, or what they were letting themselves in for.

The second group of voters, had the balls, dare I say, to vote against an established order, first time around, but will not have the courage to do it again. They have witnessed, at first hand, the distress caused by the vote, to many an honest bilingual family. These are the people who voted against Brussels, with the cunning intention of voting against London. They won’t do it again, because it’s simply too cruel on others, and unfair on themselves. In any case, they have learned the hard way, that you cannot get rid of the elite that easily. Take Theresa May, for example. She is the perfect example of an elite with whom you are stuck for life, but thankfully, not a minute longer. She became prime minister…without winning an election, and stayed on as prime minister…without winning an election. Getting rid of an elite, is just as difficult as removing that transparent cling-film, from a KLM sandwich.

But it’s not all bad news for the Leave camp, who may be in the possession of a secret weapon, cometh the second referendum. It’s a weapon that has already worked wonders in the US, where an American clown popped out of a box, to become the 45th president of the world’s most powerful country. It’s a weapon that doesn’t lie somewhere between Penzance and Newcastle, but finds its source in the much more romanesque Red Square, in Moscow. Reports are suggesting that the Russians have been meddling in the most British of practices – democracy. In the days approaching the June 23rd referendum, an increasing number of anti-EU tweets, posted in English, but originating from more than 150,000 Russian Twitter accounts, were circulated, in attempt to influence the vote.

Laura Cram and Clare Llewellyn, from the University of Edinburgh, conducted an study of more than 62 million tweets, that were directly related to Brexit, via their hashtags. They found Brexit-related tweets from a list of suspected Russian troll accounts. Although the number of tweets originating from the troll accounts was relatively small, and that most of them were tweets sent after the referendum polling stations had closed, the results are still disturbing. The impact of the tweets, on the outcome of the referendum is likely to be small. However, we will never be sure of the direct impact of these tweets, as some were being received by a potentially large number of account followers.

The significance of these findings is that they provide the first hard evidence that users identified by Twitter as having Russian links and as seeking to influence the US election, were also actively tweeting on Brexit-related issues. To establish the extent to which the Brexit debate, or indeed the UK general election, were influenced by such users we need an equivalent list of users seeking to target these specific events and a complete data set.

Although the report doesn’t establish whether the Russians were trying to interfere with the EU referendum, other researchers suggest that there was a concerted effort to influence the Brexit vote. In a concerted attack, by Russian bots, just under 45,000 tweets, concerning Brexit, were posted from troll Russian Twitter accounts, in the 48 hours around the EU referendum.

The fact that certain members of the electorate may have been influenced by a tweet, doesn’t bode well for the democratic processes. The Russians, of course, couldn’t care less about Brexit. They just want to create havoc in Europe, by turning the people of our beautiful and irreplaceable continent, against each other. Their cyber attacks are designed to influence the outcome of major political decisions in Europe, and support the rise of the various forms of nationalism. 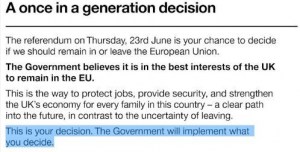 Although the referendum was “advisory”, the government made it clear that it would abide by, and implement, the decision of the UK electorate, even if it didn’t agree with the outcome. I maintain the view that a referendum has no place in our parliamentary democracies, where, like it or not, the people are not sovereign. It is up to parliament to implement decisions that can only be sanctioned by means of general elections, organised in a democratic way.

The heart of the problem, is the fact that there was a relatively small majority, in favour of a life-changing decision. A referendum concerning such an important decision, should have required a majority of at least 60%, to have any value, whatsoever. For Jean-Jacques Rousseau, “The more grave and important the questions discussed, the nearer should the opinion that is to prevail approach unanimity.” This was certainly the case for the EU referendum. If the Remain camp had won by the same small majority, it would have done nothing but hide the inappropriate nature of the referendum, due to the outcome maintaining the status quo.

Nigel Farage wishes to continue using the EU referendum – potentially the purest democratic tool known to man – as a weapon. He has admitted that its use would be for the sole purpose of silencing, once and for all, opponents to Brexit who, “will go on whingeing and whining the whole way through this process.” As if losers in an election would say, “right, now I’ve lost the election, I’ll just shut-up.” By wanting the referendum, Farage just underscores my views on the place referendums hold in a parliamentary democracy, and is a far cry from Theresa May’s vision of a country that works for everyone.

There are two other reasons why Farage may want to go through the bloody battle of an EU referendum, a second time. On 24th June 2016, the Ukip leader glorified himself in victory, calling for an Independence Day to be scratched in bold letters on all UK calendars. He may just want to feel the effects of adrenaline, once more. Alternatively, he may be secretly hoping that Brexit be reversed, in order to keep his highly paid job, at the European Parliament – an institution that he is so keen to humiliate. Ukip MEP’s attend the fewest number of European Parliament votes, than any other party in the EU.

It might just be advisable, for those who oppose Brexit, to let Nigel Farage have his way, for once, in the hope that he will be able to continue leaving an empty seat, in the European Parliament. Referendums might be useful, after all.