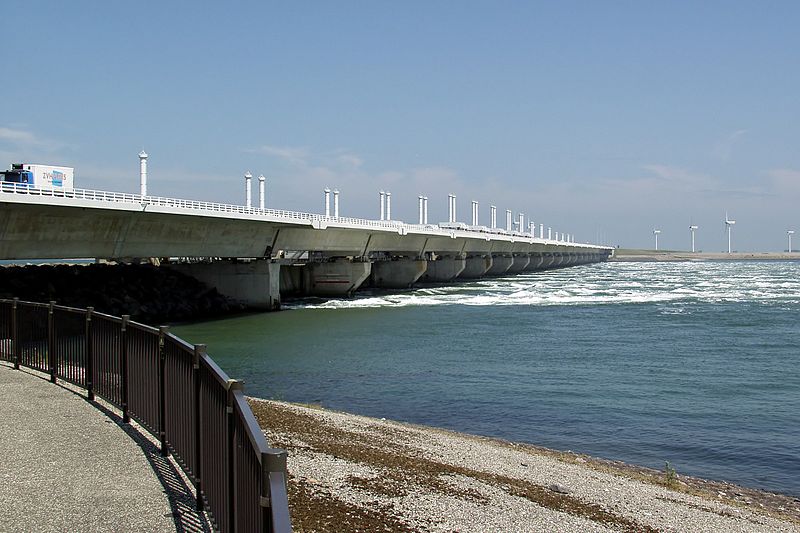 So happy under water

The latest OECD report, focussing on the work-leisure balance – so important in stopping each one of us from giving up on life – puts the Dutch at the top of the class. This does compensate the dire results of the Dutch national football team, which makes a habit of not qualifying for major international competitions. The report confirms that the Netherlands has overtaken Denmark as the country with the best work-life balance. The Dutch score a whopping 9.3, out of a possible 10, compared to Turkey’s “nul points”.

I must admit that, when I moved to the Netherlands, from France, I had real problems in getting used to the fact that well before six o’clock, practically all Dutch stores are closed for the day. The Dutch go home early, have an early dinner, and can enjoy the rest of the evening. Although I will never be able to eat as early as the Dutch do, I have become used to finishing my working-day at around 5 o’clock. Whereas in France, I found it absolutely normal to be working until 7.00 in the evening, I now start feeling impatient to stop, when the clock strikes 5.15, and I still happen to be busy.

There is one Dutch adjective that describes both the Dutch attitude towards life in general, and the society that, just by chance, I happen to find myself in. The adjective is “gezellig”, which loosely translated, means “cosy”. It’s one of those words that can only be truly understood by those who live in Dutch society. For foreigners, like me, many months of integration into Dutch society are needed to fully feel the true intensity of what the Dutch mean, when they say that, “iets is gezellig” (“something is cosy”).

When our planet Earth will come to an end, better go to the Netherlands because there everything happens 50 years later than anywhere else. (Dutch proverb ascribed to German poet, Heinrich Heine )

Maybe it’s due to the fact that the Dutch are prepared for natural and man-made calamities, 50 years before anyone else is.

An example of this can be found in Johan Huibers’ dream, as far back as 1992. Johan Huibers is now well-known as the self-employed Dutch carpenter who has built a working ‘Ark’ nearly half as long as Noah’s original. He dreamed that it rained for forty days and forty nights. The sea rose, the rivers burst their banks, and the rain would not stop. People fled to higher ground, in search of tall trees and mountaintops to escape the deluge. It was to no avail, because the waters just kept rising, and the whole world was drowned. When Johan awoke, he decided to build an ark which, up to 2016, floated in a dock off the River Maas, in Dordrecht, south of Rotterdam. The ark, you may say, is nothing new, having already been built, some 4000 years ago. The purpose of the present-day ark should not be to save the world from the floods, as in the Bible, but to warn us that, if we are not careful, our world will be destroyed. Whether you believe this through religion or science, the final message is the same – we must not play with nature, but study and protect it, reflecting Spinoza’s view that, “God is nature.” 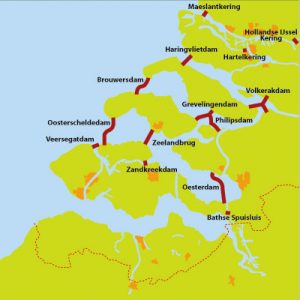 The Dutch have a unique way of combatting water – their arch-enemy since the beginnings of time. Indeed, God may have created the world and the heavens, but the Dutch certainly created the Netherlands. Against all odds, they have come to grips with Neptune, God of the Seas, by inviting the waters in, to better keep them out. The complex system of automated dikes, the “Delta Works”, has kept the Netherlands safe from the sea. This gargantuan feat of engineering is the direct consequence of the devastating floods that claimed 1837 lives, in February 1953.

On February the 21st, 1953, the Delta Commission was founded. The aim of the commission was to ensure that the country was protected from such a tragedy, in the future. The system comprises a series of floodgates and dams, that can be selectively opened or shut. The protection also encompasses the threat of rising river water levels. If needed, certain pre-ordained areas can be flooded, in order to diminish the dangers of the rising water levels of Dutch rivers. 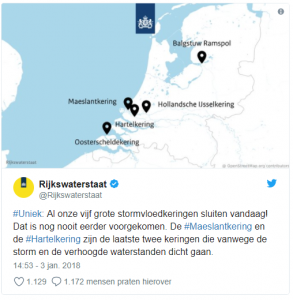 On January 3rd of this year, the entire Oosterscheldekering floodgate was closed for 90 minutes, in order to combat dangerously high seawater levels. At the same time, the other main floodgates, facing the sea, were also closed. This effectively meant that the Netherlands was cutting itself off from the sea, for the first time in its history.

I am convinced that the way that the Dutch display tolerance towards river water and raging Neptune, by selectively allowing water in, in order to keep it out, also reflects their general attitude to life. The ongoing dangers of living under sea-level, is a constant reminder that time is of the essence, and that every fleeting moment must be enjoyed and engraved. This can only be done in a spirit of tolerance, devoid of animosity.

Cycing may also be another fundamental reason why the Dutch have such a relaxed and tolerant attitude, and value their well-being above the imperatives of work. For the Dutch, cycling is heritage, history, knowledge…and cheap. 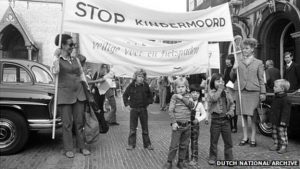 The present-day lay-out of Dutch streets and roads is largely the result of deliberate political decisions in the 1970s. The Dutch had enough of the annual carnage that took place on their roads. In 1971 alone, more than 3,000 people were killed on Dutch roads, 450 of them children. This lead to nationwide protests, asking for greater accommodation for cyclists. As a result of these protests, coupled with the Middle-East oil crises, the Dutch government decided to turn away from the car centric policies that had dominated the prosperous post war era, and revamp its road network, to accommodate cyclists.

They really have a totally different culture, and we really have a long way to go until we reach the same mentality about cycling – Boris Johnson

Well, well, BJ. It does seem that some EU countries aren’t so bad after all. In the Netherlands, there are more bicycles than residents. In the larger cities, cycling makes  up to 70% of all journeys. It begins at an early age, with most Dutch babies having been on a bike before they can walk. As cycling proficiency lessons is a compulsory part of the Dutch school curriculum, and most cycle paths run alongside main roads, keeping bikes and cars separate, there is no problem in letting your teenager cycle to school every morning – apart from the fact that he/she will be drenched by the Dutch rain, every other day.

But like all countries, the Netherlands is not perfect. In recent times, and Dutch tolerance may be showing its limits. The integration of foreigners –  Islamic communities, in particular – is regularly talked about on Dutch television. People are still voting in numbers for the extreme-right-winged party, which is slowly but surely making inroads into Dutch politics.

As I sit in Starbucks Café, in the revamped central station in Rotterdam – a building reflecting the brilliance of Dutch design – little do I realize that the very place I’m enjoying my latte macchiato in, is also enjoying life in the Netherlands, and benefiting from Dutch tolerance and generosity.

The Netherlands says they won’t let the UK be an offshore tax haven. That’s because they don’t want them taking their business. – Eelke Heemskerk

Starbucks is not the only multinational benefiting from Dutch generosity concerning taxation. Since 2005, nearly half a trillion dollars has been accumulated in the Netherlands, by companies such as Nike, General Electric, Heinz, Time Warner, Foot Locker and Activision-Blizzard. 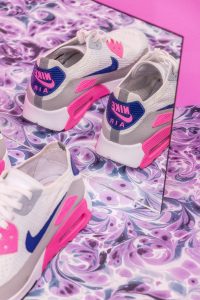 After a reorganisation of Nike’s tax-avoidance structure in 2014, the Swoosh and other trademarks were transferred from Nike’s Bermuda subsidiary to a new Dutch subsidiary, Nike Innovate CV. The Netherlands’ CV stands for “commanditaire vennootschap,” or limited partnership. It dates back to legislation in the 1830s. Lately, it has become quite a hit with non-Dutch multinationals since, if set up carefully, the firms can escape taxes, both in the Netherlands and elsewhere.

In effect, a CV that is owned by partners outside the Netherlands can be entirely stateless and, more importantly, taxless. Many US multinationals therefore set up non-Dutch holding companies that agree to form Dutch CVs.

Under the Dutch law, profits made through a CV are considered to be made by the partners, who make it up. In this way, the earnings have not been made in the Netherlands, but elsewhere, and are thus exempt from Dutch taxation. Ironically, if the company is from the US, the IRS sees it much like other companies, considering that taxation should take place in the Netherlands.

In tax-avoidance circles, this confusion is much sought after and is known as a “hybrid mismatch.” According to Gabriel Zucman, an economist at the University of California, Berkeley, “about 20 percent of all US corporate profits are now booked in such havens, a tenfold increase since the 1980s.” The EU wants to clamp down on this situation, and the Dutch government will also act (reluctantly?) in order to close the tax loopholes. 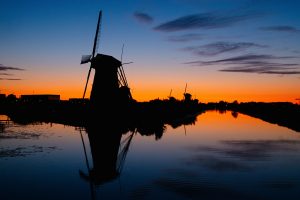 Despite the tremors of recent times and the turmoil of times to come, the Netherlands is still a cosy country to live in. I, for one, fell in love with the Dutch, as soon as I stepped off the train at Amsterdam’s Centraal Station, one fateful Saturday afternoon, back in 1998. I fell in love with the sweet smell of tulips, the comforting presence of windmills, my little house with its garden, and the everlasting thoughts of Spinoza and Descartes. Gezellig, isn’t it?