Michel Houellebecq’s controversial novel, “Submission”, published in 2015, received a mixed reception from both the press and politicians. Not surprisingly, Marine Le Pen, leader of the right-winged “Front National”, described the work as, “fiction that one day could become reality.”

Michel Houellebecq’s political fiction is in nothing a visionary work, it’s just a succession of false provocations. Islam, the place of women, Marine Le Pen… Quite predictable debates during the promotion of “Submission” – L’Express

Houellebecq describes a country facing an existential choice during a presidential election. The French have to choose between the prospect of Marine Le Pen becoming president, or the victory of the “moderate” Islamic candidate, Mohammed Ben Abbes, leader of “Muslim Fraternity.” It’s a party that forbids women to work, sending them to “finishing schools”, where they learn household chores, before getting married to polygamous men at the tender age of 15. All this, without even wearing a skirt – strictly forbidden by law. The women have to be invisible by day, and available at night,

Hidden all day in impenetrable black burka, rich Saudi women transformed themselves by night into birds of paradise with their corsets, their see-through bras, their G-strings with multicolored lace and rhinestone. They were exactly the opposite of Western women, who spent their days dressed up and looking sexy to maintain their social status, then collapsed in exhaustion once they got home, abandoning all hope of seduction in favor of clothes that were loose and shapeless.

The book got most criticism for its portrayal of the political support that Abbes receives from the mainstream republican and socialist parties, including Nicholas Sarkozy and François Hollande, in order to prevent Le Pen from winning the election. But this was no ordinary election. This was not an election about the free-market, which everybody seems to accept, but about right and wrong – a battle of values. Abbes understood that.

He understood that the pro-growth right had won the “war of ideas,” that young people today had become entrepreneurs, and that no one saw any alternative to the free market. But his real stroke of genius was to grasp that elections would no longer be about the economy but about values, and that here, too, the right was about to win the “war of ideas” without a fight.

Take time to think about it, for a minute. How would you vote if you had to choose between the far-right and Islam? Come to think of it, how would I vote? One thing is certain, when I read the novel, I was more concerned about the attitude of the main protagonist who, in the end, welcomes Islam for personal reasons, such as polygammy and a better paid university job, rather than for Islam, itself. This is what worries me – we are being too soft, and are letting ourselves be insulted by both the extreme right and conservative Islam. Whilst there is no place for xenophobia, there should also be no place for a growing influence of Islam (or any religion) in our societies. If I were faced with Houellebecq’s scenario, I would fight against both Le Pen and Abbes, and vote for neither.

If you think that Houellebecq’s “Submission” is nothing but a Caliphate phantasy, think again – and welcome to Rotterdam. 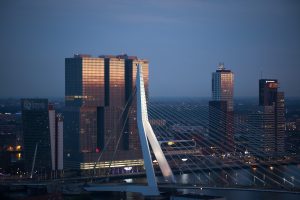 We want people to feel that they are in Rotterdam, not Istanbul. – Leefbaar Rotterdam

Rotterdam can be considered as the birthplace of present-day Dutch right-winged extremism. It was here that Pim Fortuyn, a flamboyant Dutch politician, became leader of “Leefbaar Nederland” (Livable Netherlands) in the parliamentary elections of 2002. He controversially called Islam, “a backward culture,” and wanted to definitively close the borders to Islamic migrants. Although not an extremist himslef, Fortuyn set the tone for extreme-right-winged parties, both in the Netherlands and elsewhere in Europe.

The Rotterdam College, elected in 2014, and under the leadership of the city’s mayor, Ahmed Aboutaleb, comprises five vice mayors, three of whom belong to Fortuyn’s “Leefbaar Rotterdam.”

2013 saw the birth of NIDA, a new political party in Rotterdam, promising to “make the difference by binding differences,” but whose sole aim is to promote the “holistic values of the Koran.” NIDA’s answer to Rotterdam’s problems, which comprise poverty, drug addiction and discrimination, is to allow people to indulge in spiritual enlightenment – preferably Islamic enlightenment. They should be able to do so, after having shopped at C&A, and before eating at McDonald’s, in Rotterdam’s busy city centre. All this, without the need to go back home to the derelict suburbs.

The inspiration of NIDA is as universal and essential as water. We find its source…in life’s deeper meaning and balance…in the spiritual inspirations of thousands of prophets spread around the world and over history.

Abraham, Zarathustra, Moses, Jesus, and Mohamed, left us a spiritual legacy that, over time, developed into a rich diversity of traditions and ideologies,

…that [diversity] is essentially the same: Islam. 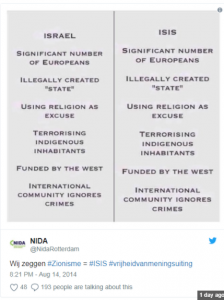 For the local elections, NIDA had managed an agreement with the leftist ecologist party, GroenLinks, to form a credible alternative to Leefbaar Rotterdam. The trust between the two parties all but vanished, when NIDA tweeted that Israel’s intervention in Gaza was comparable to that of Islamic State. Even if a coalition had worked, NIDA probably wouldn’t have done much with their ideas, full of religiosity and utopia, even if they did gain a couple more seats in the city council. As far as new mosques are concerned, NIDA would have its hands tied, in true Islamic fashion, by GroenLinks, who would only accept “palatable” NIDA policies, if a coalition were to be acceptable.

I vote Denk because I’m Turkish

In contrast to NIDA, another party that is appearing on the sidelines of Dutch politics, does seem to have the potential of being more dangerous. In 2015, Selcuk Ozturk and Tunahan Kuzu, founded DENK (meaning “think”) – a political party run by Turkish immigrants, for Turkish immigrants. In 2017, the party had 3 of its members elected to the Dutch parliament. The problem that arises is not so much the minimal presence of such a party in Dutch political life. Accepting proportional representation will produce this sort of situation. If we accept a political party defending animals, we must also accept one defending Turkish immigrants, if they get the support necessary to win parliamentary seats. The real problem, however, concerns the funding of such a party, and its ideology. DENK obviously sympathises with a country which does not share entirely the same values as the Dutch. DENK not ony receives support from the very large Turkish community, living in the Netherlands, but also funding from Erdogan’s Turkey. For André Krouwel, political analyst at Amsterdam’s Free University, DENK aligns its political ideology with that of the Turkish president, and the party’s sympathisers, “behave like Turkish nationalists, not wanting integration, but separation.” 1

On its website, DENK prides itself in not wanting integration, but mutual acceptance. This seems to suggest that the party is proning an “accept us as we are and what ideologies we support” stance. This is underscored by their wanting a public Dutch apology for mass killings during the Dutch colonial era whilst, at the same time, finding it perfectly normal that Turkey refuses to acknowledge the Armenian genocide of 1915. Even Donald Trump managed to acknowledge the fact that the Armenian mass killings was “one of the worst mass atrocities of the 20th century. Beginning in 1915, one and a half million Armenians were deported, massacred, or marched to their deaths in the final years of the Ottoman Empire.”

The performance of parties such as DENK in the upcoming local elections will be interesting to follow. At a local level, although questions centred around immigration and mosques produces much debate and polarisation, other issues, such as the licensing of coffee shops, lack of parking space, and shop opening times, are also important, and play a part in the way people vote at local elections. All too often, however, local problems and immigration issues get irreversibly intertwined. Coffee shops are seen as being used by noisy youngsters coming from immigrant families, taxis – driven by immigrants – are taking up valuable parking space, and the shops that stay open late into the night in a sleeping neighbourhood are, more often than not, Turkish or Moroccan.

Immigration never seems to stop being politicised, and that’s a shame.