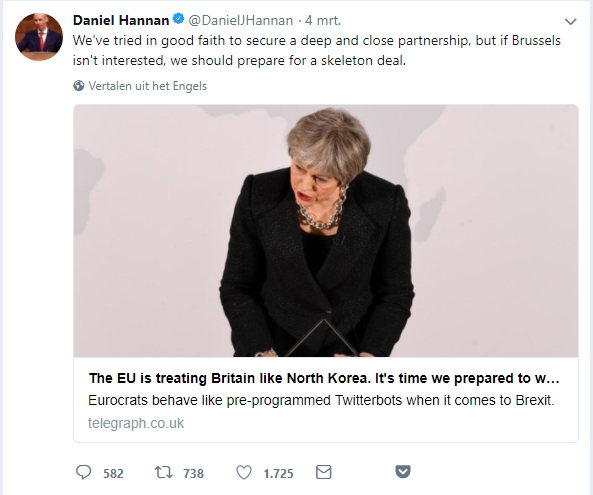 The EU is treating Britain like North Korea. It’s time we prepared to walk away. 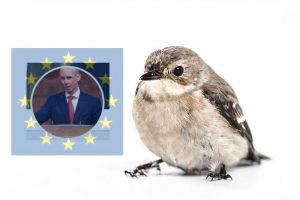 The title of Daniel Hannan’s latest blog post, published in the Daily Telegraph, says it all. The UK is a bad boy who is under fire from the monster in Brussels, who thinks he knows best. But do notice that even concerning walking away with no deal, the UK hasn’t begun its preparations yet. Either the UK is cooler than the coolest person I know, or petrified like a poor little rabbit stuck in the middle of a field, waiting for the farmer to fire the gun.

You can think what you like of Daniel Hannan’s view that EU technocrats, “behave like pre-programmed Twitterbots when it comes to Brexit,” it doesn’t change the fact that his latest post is irrelevant and full of errors.

I’m going to be fair here, and say that I agree with Hannan, that posting inflammatory tweets is rather irresponsible. It is no better than what Donald Trump does, at 2 o’clock in the morning, on a regular basis. Having said that, if EU tweets are nothing more than Twitterbots, Daniel Hannan’s latest post, is nothing short of being spam – unsolicited and repetitive – and would probably have been blocked by my mailbox.

“Heads in the sand,” and “pre-programmed Twitterbots?” It sounds more and more like the Brexit negotiations are becoming fully blind and automated, rather than comprising constructive chit-chat between a group of consenting adults.

We must all accept that Brexit is going to happen, and that it is better to have constructive discussions centered around reality, rather than one-liners and blog posts centered around phantasy.

Brussels rarely lets referendums stand in the way of deeper integration. In Denmark and in Ireland (twice), people were forced to vote again. In France and the Netherlands, they were simply ignored.

When Daniel Hannan writes about ignored referendums and ones being carried out twice, he must get all of the facts right. The French and Dutch referendums took place in 2005, and concerned the ratification of the Treaty Establishing a Constitution in Europe, and not the Lisbon Treaty. The ratification was annulled, following the results of the French and Dutch voters. As for Ireland voting twice on the Lisbon Treaty, the then Irish prime minister, Brian Cowen, convinced the EU to draft a protocol – the most legally watertight form of EU agreement – stipulating that Irish policies on tax, abortion and military neutrality would not be affected by Ireland ratifying the treaty, before the Irish were allowed to vote again.

As so often happens, Brussels officials have exploited advantages of time and place to seize control of the process.

If you look back at the UK’s reaction to the EU referendum, you can’t help but notice that it took the best part of nine months to trigger Article 50 of the Lisbon Treaty, synonymous with the 2-year countdown to the UK’s departure. Surely the UK had time to prepare at least a large part of Phase I of the negotiations (Brexit bill, citizens’ rights and Irish border). And yet, months later, only the Brexit bill has been agreed. Citizens’ rights are far from bring agreed, underscored by the fact that British citizens in the Netherlands find it necessary to take their case to court, to protect their rights.

Although most of the EU’s member states want a good deal, they are not drafting the documents.

Again, the facts need to be made clear. Michel Barnier, the chief EU negotiator, has been chosen by the EU-27 member states, to represent them in the negotiations with the UK. If individual member states do not like the final deal, their respective parliaments have the possibility to veto the deal, as does the European Parliament, and Westminster. In any case, surely Daniel Hannan is aware of the fact that individual EU-member states cannot negotiate on their own.

The Northern Ireland border seems to be the area requiring the most work for the UK government. Wanting to defend the integrity of the UK is commendable, and Theresa May must also understand that it is equally commendable to want to defend a single market, with all that it represents. Instead of scolding the EU for having tabled a draft on the subject, that is unacceptable to the UK, Theresa May should have come out with a specific draft of her own. In her speech, she made some sort of vague allusions concerning the setting-up of an all-but-invisible border, with the help of a couple of computers and a software package from Microsoft. For Theresa May, it would be more than enough just to recognise, “each other’s “trusted traders” schemes and drawing on the most advanced IT solutions so that vehicles do not need to stop at the border.”

Boris Johnson, another Brexiteer whose posts and comments are on my spammers list, reassured us all that the solution to the problem is very simple,

There are very good solutions that you could put in place that would prevent any kind of hard border which would allow goods to move freely, whilst allowing the UK to come out of the custom’s union. – Boris Johnson

His idea of a border, is one that allows free movement, without hinderance, between two countries that operate different customs protocols. Aren’t we all glad that the customs union problem is finally sorted?

As long as Brussels, encouraged by British Europhiles, believes that Brexit can be reversed, it won’t talk terms.

The EU has long respected and acknowledged the UK’s decision to leave the Union. What it cannot and must not accept, is the empty rhetoric, lacking any practical solutions, concerning how the UK proposes to get what it wants. Furthermore, the EU has put down in writing, concrete proposals concerning the terms of the UK withdrawal from the EU:

I somehow feel sorry for poor old Mrs May. It must be hard to come out with concrete solutions for something you don’t really believe in the first place. Let us not forget that she was on the Remain side of the great divide, and now faces the unenviable task of making sure everybody disagrees and squabbles. She is right in saying that, during negotiations, you rarely get more than half of what you bargained for. But in the case of the UK’s absence of drafted, concrete, and practical propositions, concerning how to go about Brexit, the half of zero is still zero, I’m afraid.