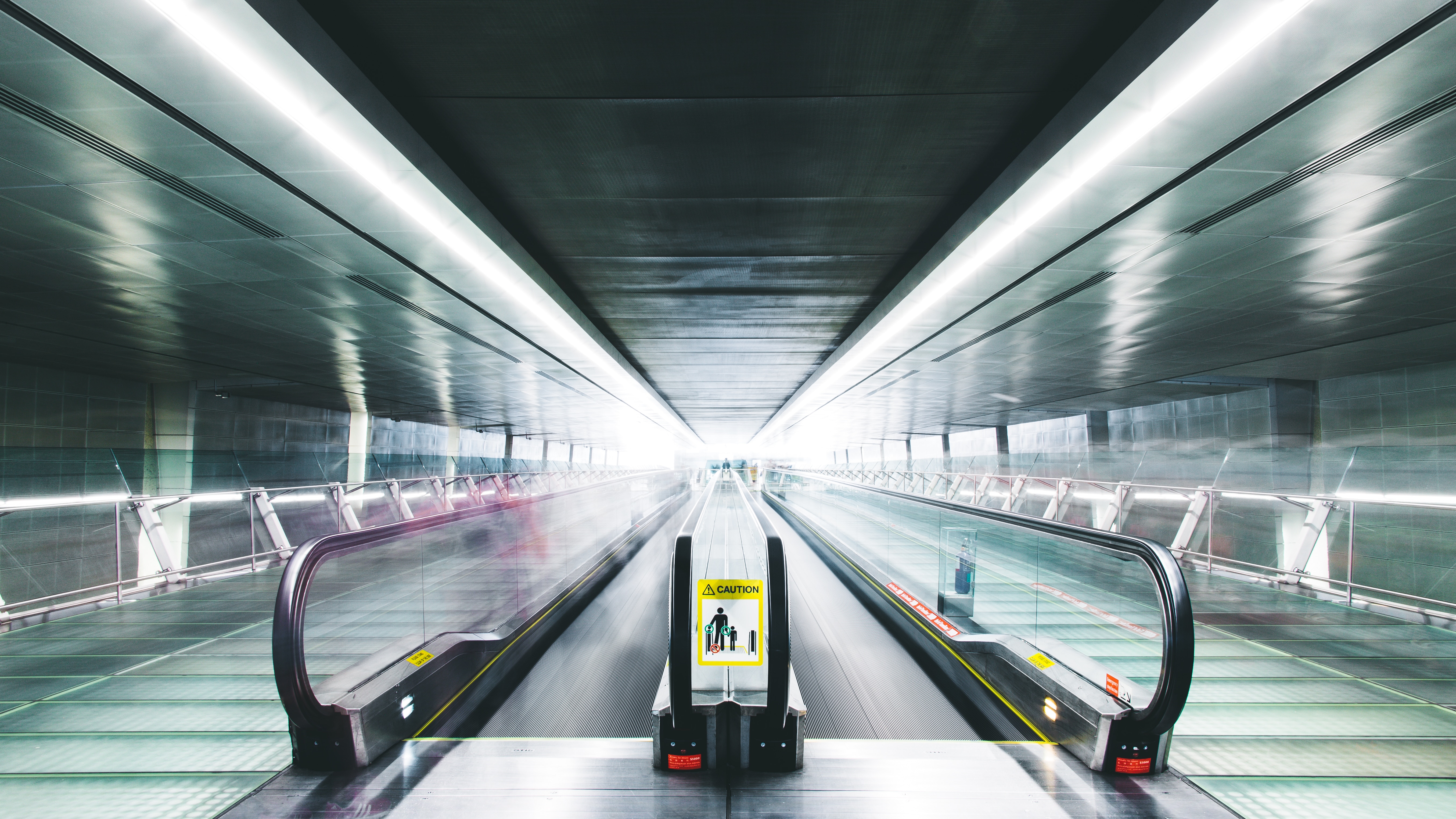 They come and they go, brought in by the wind of change, swept away by a river of delusions. The ireality of what they promise is only matched by the conspicuousness of their incompetence. Will the Brexit secretary 3.0 be any better than his predecessors? The big question is, though, whether he will make it through the season of good will. It would help, of course, if Brexit secretaries were actually trained to be Brexit secretaries and not just dumped in a position that they did not want in the first place, and knew nothing about.

At the very beginning of the negotiations, the sight of David Davis arriving in Brussels with not even a ballpoint pen in his pocket, was a premonitory sign that things would not go well. Maybe his papers were in Berlin instead of Brussels, because during the campaign, he tweeted, “The first calling point of the UK’s negotiator immediately after #Brexit will not be Brussels, it will be Berlin, to strike a deal.” 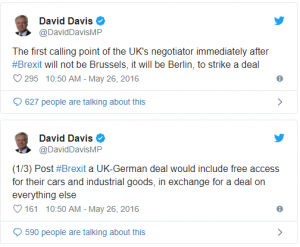 David Davis was (and maybe still is) ignorant of the way the EU functions, the fundamental importance of the single market, and the problem of the Irish border (he qualified the border as being “internal”). Basic knowledge of the EU is surely a prerequisite for any Brexit secretary. Davis believes that the EU is constantly bluffing in wanting to defend the values that are so implicit to its very existence. This lack of knowledge, despite the pleas of British industry, explains why he was so surprised and disappointed after the Chequers agreement, and had no choice but to resign. The current withdrawal agreement is based on Chequers, and is a carbon copy of an EU set-up, with minor modifications that will appease the unsuspecting Leave voter in Newcastle and Stoke. It reflects the unchangeable nature of EU institutions, especially those related to the four fundamental freedoms that are inseparable from one another, and constitute the pillars on which the EU is constructed.

Brexit secretary 2.0, Dominic Raab, probably knows a little more about the EU than his predecessor but doesn’t realise that if the UK does leave, there will be that funny old line that divides two or more countries from each other – it’s called a border.

We want a bespoken arrangement on goods which recognises the peculiar geographic economic entity that is the United Kingdom….I hadn’t quite understood the full extent of this, but if you look at the UK and look at how we trade in goods, we are particularly reliant on the Dover-Calais crossing. – Dominic Raab

Wow! Yes Dominic, the UK’s an island, and that particular geographical anomaly is due to the fact that the Brits are surrounded by water that contains a lot of tiny little fish – which is another thing that the evil little men from Brussels want to get their hands on.

If Dominic Raab hadn’t understood the Dover-Calais crossing, he should have asked me. I’ve made more crossings than he’s had hot dinners, coming from a French family in London, you see. I remember one occasion when we decided that my great-aunt come back to London with us, at the end of the holidays, in order to get her teeth fixed on the NHS (yes, it was happening even then). She was so scared to make the crossing on a Sealink ferry that she spent many toothless years. We finally persuaded her to make the crossing and, as fate would have it, a force 10 gale swept us from Calais to Dover in no time.

I used to hate geography at school, because being in a French school, we had to learn the complete list of French “départements” beginning with number 01 for Ain, and ending with number 95, Val d’Oise. Even though we were obsessed with the French regions, I do remember clearly noticing how close to mainland Europe the UK was, and I’m pretty certain that elite students attending elite schools cannot have missed that either.

I suppose that it’s all the fault of the Eurostar. Dominic Raab was only 16, when British and French construction workers met in the confines of a dark tunnel, in 1990. Poor Dominic never realised that there was actually water above the tunnel.

Out of interest, here are some other things that Dominic Raab is having trouble with, 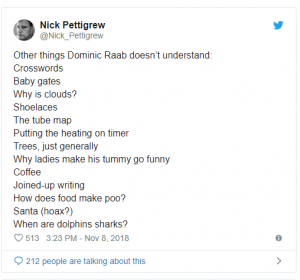 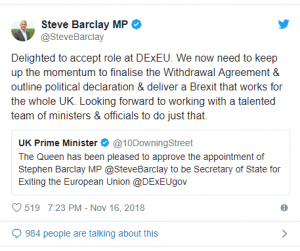 It sounds good – just keep up the momentum, make sure not to say anything stupid, and keep away from embarrassing geography questions. In fact, Steve Barclay may be the lucky one, his task being facilitated by the fact that he doesn’t need to work on a deal he doesn’t understand or, better still, may not have a deal at all, to worry about. In any case, Theresa May has ordered him to stay at home, not to open the front door to strangers with a foreign accent, and focus solely on domestic preparations rather than negotiations. At least he won’t be tested on geography, nor will he run the risk of forgetting his negotiation documents and ballpoint pen, on the London to Brussels Eurostar.