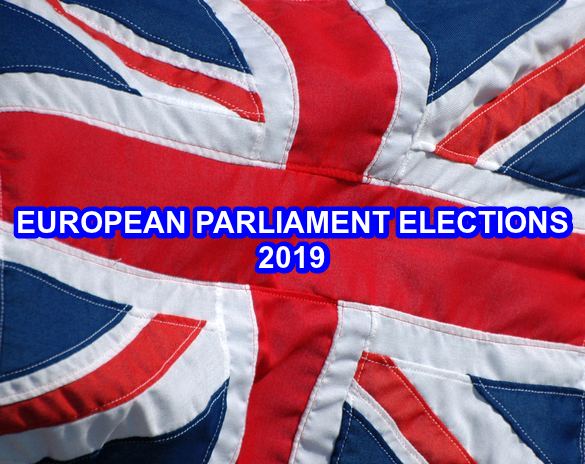 Today, under Theresa May, many EU citizens have been denied the right to vote in their own elections. What would happen tomorrow under Boris Johnson?

Reports that many EU citizens living in the UK have been denied voting rights in the European parliament elections defy belief. It was so easy for me to cast my vote here in the Netherlands, having been informed as to which form had to be submitted to the council, and when. The convocation was sent to my home days before polling day and my driving licence was all I needed to vote. The administrative procedure was simple  – I registered my French citizenship with my local council and subsequently filled in a Y32 form that would allow me to receive a voting card. 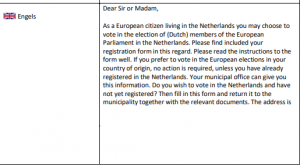 In the UK, a similar form – UC1 – had to be completed and sent to local councils before May 7th. 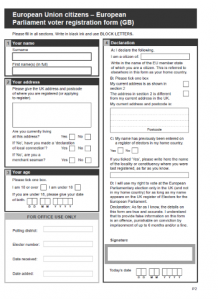 Forgive me for doubting, but I do wonder how the UK will cope with the registration of millions of EU citizens seeking a settled status, when administrative failures occur at such a high rate for such a simple procedure that is a declaration and nothing else. It’s not rocket science, but then again the UK cannot build rockets either without outside help. Even as a last resort, the forms could have been available at the polling stations to be filled in by all those who were registered to vote but who did not have the necessary form.

It all gives us hope for the future after Brexit, when “hugely experienced” councils will have no experience whatsoever in climbing administrative mountains.

Whereas it can be argued that it was not known until April that the UK would have to participate in the European elections, Theresa May’s government have been boasting for long enough that all possible outcomes of the Brexit negotiations had been considered and accounted for. Surely this includes participation in a European vote as part of continuing membership of the EU.

Of great comfort to those who could not vote is the Local Government Association’s comment that,

Councils are hugely experienced at running elections and have worked tirelessly around-the-clock to get everything in place for these EU elections at short notice. The fact that these elections appear to be going smoothly is testament to their incredible hard-work and expertise.

The granting of an extension for the Brexit negotiations that was synonymous with participation in the European elections was made public on 11th April, less than a month before the deadline of May 7th. Did the councils really run out of time to carry out an administrative procedure that was long known as a possible outcome? What stopped the councils from sending out the forms at the same time as other EU-member-states even if it was not yet certain that the UK would participate in the elections?

It all gives us hope for the future after Brexit, when “hugely experienced” councils will have no experience whatsoever in climbing administrative mountains.

It is yet another slap in the face for EU citizens who have already suffered three years of insults, threats and the prospect of having to ask permission to live in their own homes.

I have written at length about the possibility of administrative mistakes having effects on thousands of people’s lives. The frustration of EU citizens living in the UK who have just been denied a fundamental EU right – the right of vote in European parliament elections that mean so much to them – is a direct consequence of the way that the UK pretends to look after EU citizens living within it shores. It is yet another slap in the face for EU citizens who have already suffered three years of insults, threats and the prospect of having to ask permission to live in their own homes.

Today, under Theresa May’s government, many EU citizens have been denied the right to vote in their own elections. She is the leader of a government that does not care, and she is a leader who does not care. In answering a concern coming from an MP who wanted reassurances that EU citizens would be able to vote, by making the forms available at the polling stations, she sarcastically commented,

We take every step to make sure that those who are entitled to vote in elections are indeed able to do so. […] It (the late decision to participate in the European elections) was a decision taken by this House not to agree on the 29th of March that we would agree the deal such as it would not have been necessary to hold European elections.

Following that logic, it can be argued that if the EU hadn’t existed, all this fuss over Brexit would have been irrelevant. In the same way, the fact that Theresa May did not visit the Grenfell Tower immediately after the tragedy and did not meet the survivors was of no importance because the tragedy wouldn’t have happened in the first place, had there not been a fridge to catch fire in a tower that was not fit to be lived in.

Being one of many British citizens who were disenfranchised for the EU referendum, I suppose that EU citizens in the UK can take comfort from the fact that the UK treats its own citizens in the same way. Not being able to participate in a political process that will affect your way of living is both frustrating and deeply upsetting. I have still not forgiven the UK for disenfranchising me, and have lost all respect for the UK’s political system and sense of democracy. When I voted for the European elections, the document that I presented to prove my identity was not my Dutch driving license, as is allowed, but my French passport. French citizenship comprises the eligibility to vote for life wherever you live and no matter how long you have been away from France. It ensures that you still keep a bond with a country you love but left for whatever reason.

Unfortunately, disenfranchisement of EU citizens in the UK may be nothing compared to the administrative problems that they would face post-Brexit, under the leadership of Boris Johnson.