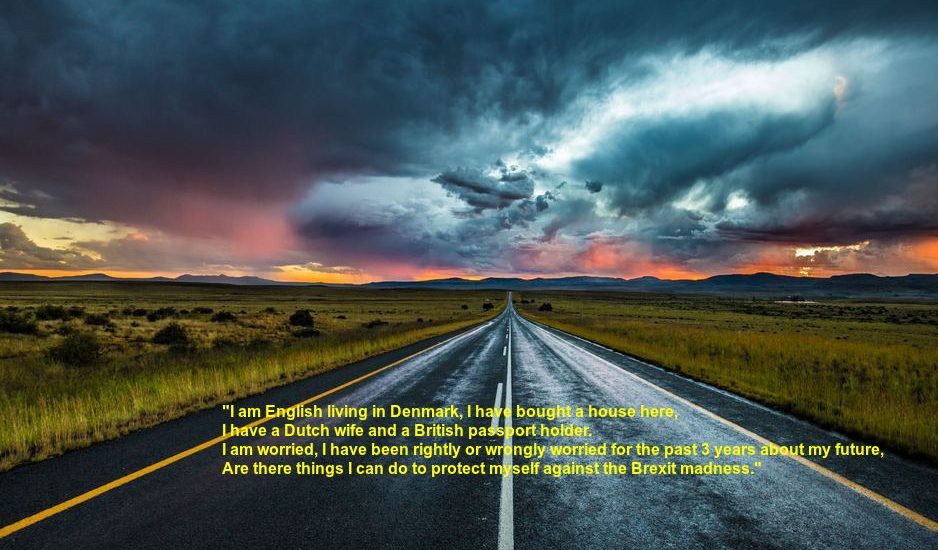 I came across a Facebook posting from a British citizen living in an EU-27 Member State. He, like most of us, is lost in the maze of truths, untruths, threats and reassurances that make up the Brexit jungle. It is a jungle that is rapidly turning into a morass and the continuing uncertainty is sinking us all. Citizens’ rights should have been done and dusted a long time ago. Instead, it is the citizens who have been done for.

I am English living in Denmark, I have bought a house here, I have a Dutch wife and a British passport holder. I am worried, I have been rightly or wrongly worried for the past 3 years about my future, are there things I can do to protect myself against the Brexit madness.

In the name of democracy they are free to do so, of course. In the name of democracy – if that’s what it was – the referendum result should be respected. But their freedom to choose a future outside the EU stops where our freedom to remain in the Union begins. Those who know nothing about what it means to have rights that you rely on, at best threatened, at worst taken away, cannot measure the psychological unrest that many British citizens in Europe are experiencing. We are the sort of guys the Brexit people don’t understand, the sort of guys they don’t care about, and the sort of guys they voted against.

October 31st appears to be increasingly ominous. The UK will be led by an elite who went to both Eton and Oxford. He firmly believes that freedom of movement is a myth.

It’s a total myth – nonsense. It is stupid to say that freedom of movement is a fundamental right. –  Boris Johnson

How can we trust him? This is the same man who said that the UK would “pay its bills,” and who is now threatening to withhold part of the divorce bill that was agreed. He will do anything to get Brexit through and, if he does, it can be feared that the EU will respond in similar fashion. If that were the case, the psychological uncertainty that our lost friend in Denmark is facing might turn into uncomfortable reality.