No one was much bothered by what had been leaked. Kim Darroch, the UK ambassador to the US, had only reported back what had long been obvious to the entire world: that Donald Trump was vain and inept and ran a wholly dysfunctional administration. It was the sort of email that anyone might send after watching the news headlines on American television. – John Crace, The Guardian

Don’t mock the afflicted, just don’t. But the former UK ambassador to the US, Kim Darroch, has just been afflicted – big time. Not only did we get to know about his sex-life – and take it from me, sex is the only thing we want to know about in his life – we also witnessed him being morally lynched for having stated the bleeding obvious. And the rest of the world let it happen without raising a finger or blinking an eye. I do get the feeling that there is something for all of us men to learn from this unfortunate episode in human history, and it’s this: after having had more than a cuddle with a complete stranger, if she tells you, “that was great darling, but duty calls and I just have to take a leak,” beware! Your integrity is at risk and just make sure your laptop is safely stored under your bed or under the chair in front of you, and your mobile is switched to Flight Mode.

A UK ambassador is forced to resign when some blonde pushes the “send” icon by mistake on a 15-inch laptop, and his own government has never heard of him.

But what’s all the fuss about? We as men, all know what happens when a blonde responding to the name Isabel Oakeshott invites us for a cup of coffee. As for Donald Trump, the whole world knows what he does after having watched a repeat episode of the Flintstones. Yep, he does exactly what the ambassador does, he states the bleeding obvious! 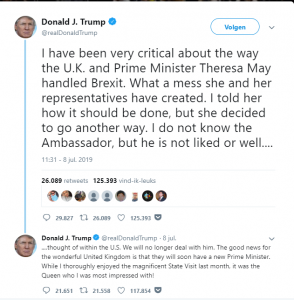 Is Donald Trump saying that the Queen will be the next prime minister? Or maybe the next ambassador? I must say that these 280-character-tweets are very confusing sometimes. Life sucks, doesn’t it. It seems that an American president can get away with a tweet that is consciously posted before you can shout, “Yabba Dabba Doo,” but a UK ambassador is forced to resign when some blonde pushes the “send” icon by mistake on a 15-inch laptop, and his own government has never heard of him.

Diplomacy is the art of telling people to go to hell in such a way that they ask for directions.

In a way, Kim Darroch has failed in his role as ambassador. He is a diplomat and the art of diplomacy is telling heads of state that they’re useless in such a way that they take it as a compliment. Winston Churchill would have been a good ambassador because he knew that, “diplomacy is the art of telling people to go to hell in such a way that they ask for directions.” Why not get the Queen to be the next UK ambassador in Washington. She could do with a change and Trump is impressed by her. It’s possibly the start of a special post-Brexit relationship. As for the sex that everybody’s interested in, if Trump invites her up for coffee, she can hit him between the legs with her handbag.