The death of Stephen Hawking was, above all, a tragic loss for his immediate family and closest friends. The world of physics, and science in general, will also be much the poorer without him.

Whereas none of us, common mortals, would be able to write a bestseller on the history of time, or come up with such intricate theories about black holes, there is one aspect of Hawking’s life and thoughts that should be reachable to us all, if we feel so inclined. I’m referring to his position on religion and beliefs.

Stephen Hawking made it perfectly clear that he did not believe in God, and also gave us logical, well founded reasons why, without provocation.

When people ask me if a god created the universe, I tell them that the question itself makes no sense. Time didn’t exist before the big bang, so there is no time for God to make the universe in. It’s like asking directions to the edge of the earth. The Earth is a sphere; it doesn’t have an edge; so looking for it is a futile exercise. We are each free to believe what we want, and it’s my view that the simplest explanation is; there is no God. No one created our universe, and no one directs our fate. This leads me to a profound realization: there is probably no heaven, and no afterlife either. We have this one life to appreciate the grand design of the universe, and for that I am extremely grateful. – Stephen Hawking

Positioning himself as an atheist, Hawking only did what we should all be able to do – contest without provocation, circumstances permitting. The problem is that circumstances, be they familial or societal, do not always permit atheists to defend themselves and be proud of their views, in the same way that believers do, and are. I have had this experience on several occasions and, in true good atheist fashion, I shut-up, and let the believer have the upper hand. Not that I’m shy, or afraid to air my views, but because I would rather refrain my thoughts, than hurt the inner feelings of someone who deeply believes in God and the afterlife.

Atheists have a double problem. Those, like Richard Dawkins, who provoke, will never win the argument, and will only be treated as atheist fanatics. Others, who try to construct reasoned arguments without seeking to offend, will be rebuffed by fallacious counter-arguments, and denials. Most of the time, believers will tell you that you have misinterpreted the Holy Scriptures – be it the Koran or the Bible – or that what you say is not their interpretation of the text that you are referring to. Another fallacious argument put forwards to discredit critics of religion, is simply to negate the criticism or remark. An example of this, is the German-Egyptian political scientist and author, Hamed Abdel Samad, not managing to convince a young Muslim woman, that Mohamed did not promote women’s rights, and that these rights existed well before Islam did. His argument was that Mohamed’s first wife was his wealthy employer, and that the reported killing of baby girls, that Mohamed is supposed to have ended, was not substantiated. “We don’t have the same sources,” was her reply. According an entry in Wikipedia, “the absence of reliable historical sources and factual information, aside from Islamic traditionalists’ sources and stories, make ascertaining the truth about the pre-Islamic way of life and culture almost impossible to substantiate.”

Islam, of course, is not the only religion whose adepts refuse to hear criticism or participate in productive discussions. My sporadic attempts to debate with believers – Catholic and Protestant – have been systematically doomed to fail. What is unacceptable and disturbing, though, is that believers have seriously questioned how I could have moral and ethical values, without constantly referring to the Bible – as if they were the only ones, it seems, having all the answers to how we should lead a good life.

Refuting religion – with particular reference to the way people interpret, and act on, religious principles – has scientific, theological, and political connotations. It is certainly the latter that causes the most problems, and is responsible for the onset of violent conducts. For many, particularly those avid for power, negating religion also negates the sort of politics they believe in and want to enact. Even in the more subdued family setting, religion can be an integral part of family life. Remove the religion, and the patriarchal “family politics” is threatened, endangering the very way the family is set up. This explains the high prevalence of family outcasts – women in particular – who have chosen to express their atheism openly.

It is high time that anonymous atheists, who do not have the fame and reputation of Richard Dawkings or Stephen Hawking, stopped being intimidated into silently remaining in religious circles that they do not feel part of. Atheism must not become a luxury item that is available to a selected few.

Realizing that you are atheist is not quite the same as proclaiming it. Many victims of religious seclusion are young women who dare not come out into the open about their atheism, for fear of being excluded from the familial support that they need. This constant intimidation is more than comparable to the sexual harassment and abuse, endured by thousands of women, all over the world, and surely deserves a #MeToo of its own.

A detailed report published by the  International Humanist and Ethical Union, in 2015, suggests that only two countries in the world – the Netherlands and Belgium – can be considered as being totally free of discrimination on religious grounds. One can be cynical by commenting that Belgium is so liberal and tolerant, that even Islamic terrorists can go about their business, freely. Many countries, including the UK, whilst being exempt from religious discrimination, do show signs of religious bias in schools, and some public services. Countries with the harshest laws for blasphemy and apostasy include Afghanistan, Iran, Pakistan, Qatar, Saudi Arabia, and Yemen. 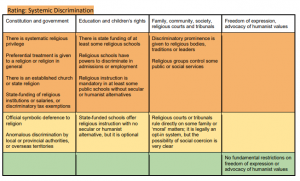 Egypt is taking religious harassment to its logical conclusion, having gone from considering atheism as a form of mental illness, to considering making it out-and-out illegal. If the law goes through, atheists could go to prison for up to 5 years, whether they admit to their atheism, or not. How the Egyptian authorities will determine whether you are an atheist, is anybody’s guess. Maybe you will have to sit a multiple choice exam, based on the content of the Koran, and you will fail the test if all the questions are not answered correctly. No other country officially outlaws atheism, but people can be put to death for blasphemy or apostasy in at least 13 countries.

The phenomenon [of atheism] is being promoted in society as freedom of belief, when this is totally wrong. – Amro Hamroush, head of Egypt’s Parliament’s committee on religion

This comment, emanating from a high-ranking Egyptian official, deserves no comment at all, except to say that it reflects the fact that when you haven’t got anything else, God is all that remains.

Rafida Bonya Ahmed is a Bangladeshi-American author, humanist activist and blogger. In 2015, she and her husband were brutally attacked by Islamic extremists while they were visiting Dhaka on a book signing trip. She suffered severe injuries, and her husband died after being taken to hospital.

Once a country silences and intimidates its intellectuals and freethinkers , a vicious cycle of terror and extremism becomes inevitable, just as we saw in the earlier mass-killings of the Bengali intellectuals in the 1971 Liberation war, again at the hands of religious extremists, it creates an intellectual vacuum, from which it could take many, many years to revert. – Rafida Bonya Ahmed

If atheism is considered to be punishable, we should be proud of the crime we have committed and, like the LGBT community which regularly organises marches to underscore its place in society, so too should we. If atheism is considered as a handicap, we should act in the same way that handicapped do. They are also proud of their status, and are not scared to show that they are still human beings, capable of surpassing themselves in the paralympic games. Maybe atheists should also organise their own games, just to show religious fanatics, that they too, have had power and talent handed down by the gods. However, I’m not quite sure that the Greek gods would appreciate a bunch of overdeveloped atheists, running around Mount Olympus, in broad daylight.