This is a fitting tribute to the future of reason, where everything is so logical and clear-cut. The UK has finally won me over, and convinced me to renew my UK passport even though I have a French one. The passport will not be “blue” but “bleu”….Merci les Amis.

Brexit is a sad affair for most of us and, even for those like me who will not be too affected, it’s getting beyond a joke. But I think you will agree with me that anything that makes us laugh, concerning Brexit, is well worth a giggle and its price in gold (or is that Euro’s?). 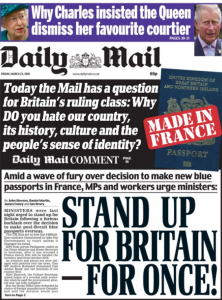 Just to see the Daily Mail’s headline, has made my day here, in flat old Holland. Knowing that I’ll be protected by my French passport is reassuring, and I really hope that those of you who haven’t yet acquired a second (EU) nationality are really thinking about doing so.

What’s even better, is that a Franco-Dutch firm has just been awarded 490 million quid to print British passports. What more can I ask for? A British-French citizen, living in Holland for nearly 20 years, getting a document that contains the souls of the three countries he loves the most in the EU. Fantastique, non? This is le Brexit at its very best, and the very best of the EU. Only member states of the Union can gang up, like that, and give a leaving member state a little tap on his “derrière” – if you’ll pardon my French.

I’ve always known the British to be like this, and, trust me, I’m still a Londoner, whether I like it or not. I remember my times at dental school when the dental technician, us poor students had to work with (something wrong with the grammar, there?), just hated the French. Quite justified, I suppose, because it was at a time when the Froggies were testing nukes, right, left and centre. But the funny thing was, every September, he would tell us how he drove all the way to the South Of France in his Peugeot 404, sampling French wine and camembert, on the way down. You see, the Brits have always loved the French. The only thing is, they either subconsciously deny it, or ignore it. That’s the true meaning of the “Entente Cordiale” – that loving feeling between the Frogs and the Rosbifs (the French insult the English by calling them “roast beef”) that has absolutely nothing to do with lemon cordial. I’m the living proof that the French and the English can get together, and bring up children – but not necessarily in that order.

Well, in the very near future, British tourists will not only be shown the slow lane at all major international airports, but will have to painfully exhibit their non-union passport “Fabriqué en France” (Made in France). The passport’s colour is going to reflect French avant-garde art. It’s not going to be the blue-black version (or was it black-blue?) dating even further back than when England last won a World Cup, but a resplendent blue, reminiscent of Pablo Picasso’s “Blue Period.” Inspired in Spain, but painted in Paris, the British tourist will have plenty of time to admire the colour of his/her passport and reflect on the meaning of it all.

But let us not mock the afflicted. As one desperate Leaver (at least, I think he is) wrote on the Daily Mail website,

Well Sir or Madam, be grateful to the French, they have given you the passport you so desperately wanted. The Dutch have given you the courage to use it. They do say that, “L’Union fait la force,” (Unity is strength) don’t they? And, in this case, it’s the European Union I’m referring to.