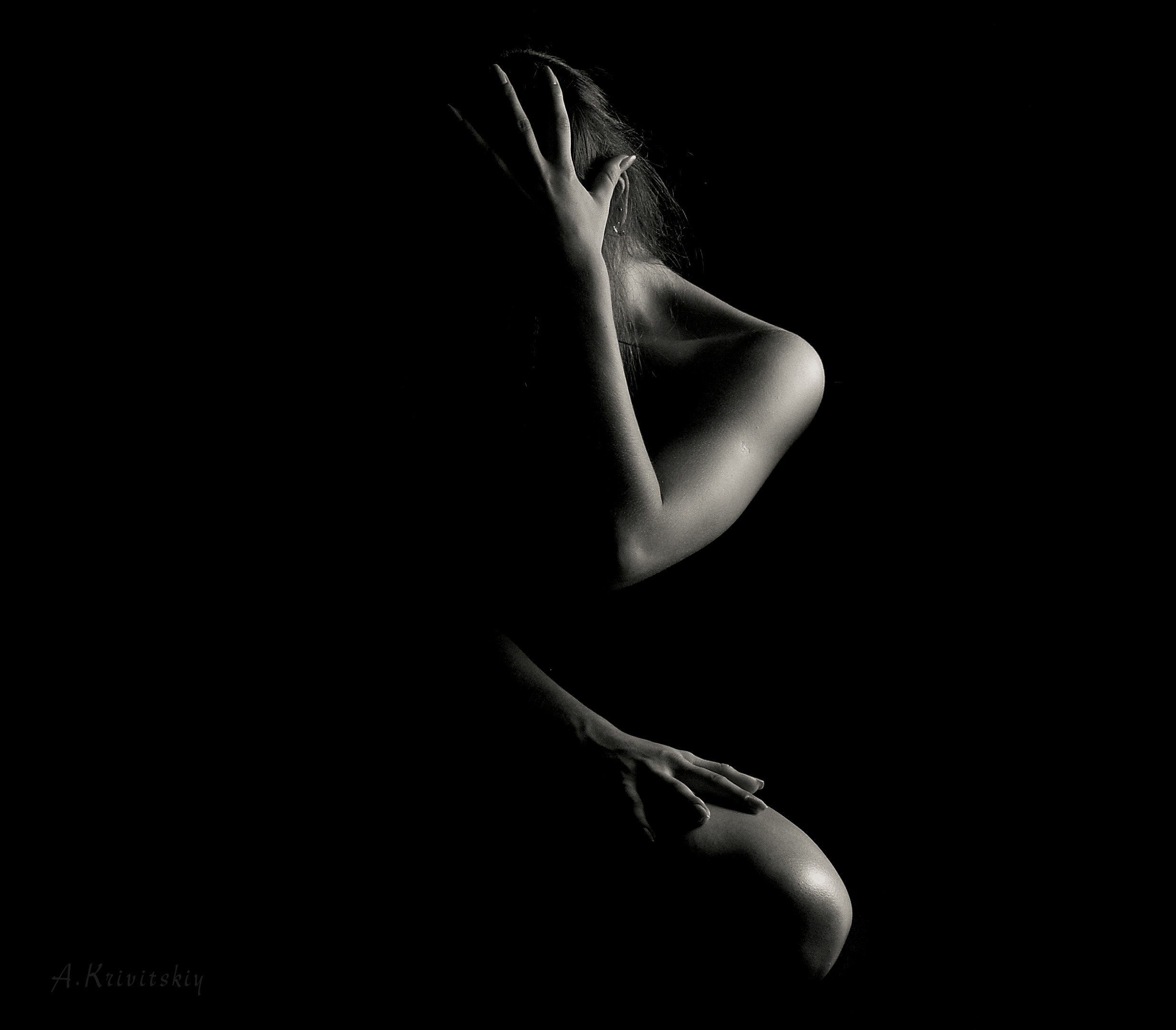 A man’s only as old as the woman he feels. – Groucho Marx

I suppose that it’s the job of every psychologist to analyse the deep and hidden impulses that underscore the actions of men and women. Their job is to enlighten us, to differentiate between what is inherent to our genome, from what we may want to suppress. But psychologists are also men and women, and can be trapped by their own misconceptions and biases.

In his article, entitled, “Feminists think that sexist men are sexier than “woke” men,” online psychologist David Ley, has shown us that not only can psychologists be wrong, but also dangerous. The notion of benevolent sexism (BS) that he defends reminds me of the arguments used by certain young Tunisian women who are against reforming the inheritance laws of their country. They find it reasonable that since men are there to protect and worship them, women must be willing to accept the blatantly patriarchal inheritance laws.

It is important to note that sexism and mysogyny are not identical concepts. (1)

Indeed, sexism and misogyny are not the same, but although the former can exist on its own, it is the condition that leads to the latter. Sexism is an underlying vague and erroneous dogma that women have no place in society, other than the family. Misogyny is just making sure that the dogma is rigorously applied to millions of women, by making sexism a personal vendetta directed against women who dare to exist.

Women who find sexist men attractive are not being traitors to other women, nor are they naïve women who don’t understand their choices. Instead, they are women who are making rational decisions, accepting tradeoffs. (1)

Ley’s approval of BS is surprising, to say the least. He mentions a tradeoff that the woman is prepared to accept, in order to be “protected” by the man. What he fails to mention is that the tradeoff entails not a loss of independence – which is bad enough –  but a loss of an identity that is so entrenched in the psyche of each individual, that it is synonymous with the definition of who we all are. These women are not traitors to other women, they are traitors to themselves.

The question to be asked, before we can pass judgement on the well-foundedness of BS, is exactly what this kind of sexism entails. In a recent study entitled, “Benevolent Sexism and Mate Preferences: Why Do Women Prefer Benevolent Men Despite Recognizing That They Can Be Undermining?” Pelin Gul and Tom Kupfer report the results of a series of investigations that suggest that some women are attracted to BS men, with the benevolence going far beyond opening doors for women and paying dinner bills. I do the former all the time and, as for the dinner bills, my wife always seems to need to go to the ladies, when the bill arrives at the table.

The premise of the investigation is as follows. Given the choice between hostile sexism (HS) outside the comfort of their own homes, women will choose the relative comfort of benevolent sexism, within the confines of their kitchens – not taking into account that neither the homes nor the kitchens belong to the women, in the first place. In a nutshell, thus, hostile sexism is characterised by overtly prejudiced attitudes towards women whom you hate, whilst benevolent sexism comprises a subjectively prejudiced attitude that is masked by the fact that you love and cherish women in the same way you loved and cherished that Action Man you got for your tenth birthday.

We propose that attitudes and behaviors typically included under the rubric of BS are taken as signals by women that a man has characteristics that are desirable in a potential mate; specifically, that he is willing to invest by being protective, providing, and committed. This benevolence as a mate-preference perspective suggests that women may prefer BS men despite knowing that they can be undermining because the desirable aspects of a man’s benevolent attitudes and behaviors outweigh the potential downsides. (2)

Not only do these women know that they will be undermined by macho men, but they also take comfort from this undermining.

Women might approve of BS, therefore, because men with benevolent attitudes and behaviors can maximize women’s benefits by offering what they tend to lack (the provision of material resources) within the gender-role divided society. (2)

It does seem that it is precisely the gender-role divided society that is not only the problem, but also the solution. Has humanity made no advances at all since the days when Mrs Flintstone stayed in her cave looking after the little Flintstones, whilst Mr Flintstone went out happily hunting with his pals, and accidentally discovered fire, and invented the wheel?

I have absolutely no training in psychology, which probably makes me apt to give an unbiased view on the subject. The first question that I ask myself is whether the methodology used in the study is well-founded and credible. It is based on the ambivalent sexism inventory (ASI) to differentiate between hostile and benevolent sexisms, as described by Peter Glick and Susan Fiske.

For the authors, there exists a close link between HS and BS, both sharing three types of behaviours – protective paternalism, complementary gender differentiation, and heterosexual intimacy.

Advocates of dominative paternalism justify patriarchy by viewing women as not being fully competent adults, legitimizing the need for a superordinate male figure. Yet protective paternalism may coexist with its dominative counterpart because men are dyadically dependent on women (because of heterosexual reproduction) as wives, mothers, and romantic objects; thus, women are to be loved, cherished, and protected (their “weaknesses” require that men fulfill the protector-and-provider role). (3)

I’ll be honest – if you asked me whether it was better for a mother to go back to work, just weeks after the birth of her child, I would have serious hesitations. I do believe that, in the first period of his/her life, a baby is in constant need of maternal contact. Having said that, the choice must be left to the mother to make, and no-one else.

Competitive gender differentiation presents a social justification for male structural power. Only men are perceived as having the traits necessary to govern important social institutions. (3)

However, this gender differentiation, used to justify the downgrading of women can actually serve as an excuse to protect them, in a home environment – with the term “protection” being subjectively used by the man, and subjectively perceived by the woman. In this way, when I open a door for a woman, and let her out first, is it because I think that she hasn’t the strength to open the door by herself? Subjectivity also poses a problem, with your idea of “protection” probably being quite different from mine.

In my view, this is the most potent source of male ambivalence concerning their relationship with women.  For Gilcke and Fiske,

Heterosexuality is, undoubtedly, one of the most powerful sources of men’s ambivalence toward women. Heterosexual romantic relationships are ranked by men (and women) as one of the top sources of happiness in life. (3)

Men’s sexual motivation toward women may be linked with a genuine desire for psychological closeness ( heterosexual intimacy). Although, at their best, heterosexual relationships are the source of euphoric and intimate feelings, romantic relationships between men and women also pose the greatest threat of violence toward women. Men’s dyadic dependency on women creates an unusual situation in which members of a more powerful group are dependent on members of a subordinate group. Sex is popularly viewed as a resource for which women act as the gatekeepers. (3)

And the problem is, of course, that a lot of men end up gate-crashing, out of pure desperation of not living in Russ Meyer’s “Beyond the Valley of the Dolls.”

Out of interest, I carried out an online ASI test. You can do it too, via this link. Having to answer questions by giving your approval on a scale from 0 (totally disagree) to 5 (totally agree) can prove difficult. What is the difference between 2 and 3, or 1 and 2?

The types of questions asked are as follows:

Hostile Sexism
Women exaggerate problems at work
Women are too easily offended
Most women interpret innocent remarks as sexist
When women lose fairly, they claim discrimination
Women seek special favors under guise of equality
Feminists are making reasonable demands
Feminists not seeking more power than men
Women seek power by gaining control over men
Few women tease men sexually
Once a man commits, she puts him on a tight leash
Women fail to appreciate all men do for them

– Protective Paternalism:
A good woman should be set on a pedestal
Women should be cherished and protected by men
Men should sacrifice to provide for women
In a disaster, women need not be rescued first

The results I obtained are shown in this table: 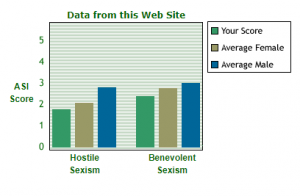 I don’t know whether I should be worried about scoring less than the average female. It seems that the score I obtained corroborates my views, described elsewhere, that women should be considered, above all, as human beings. But why isn’t my hostile sexism zero? It could be due to the fact that I think that women get offended too easily, and that not all feminists are making reasonable demands.

According to Gul and Kupfer’s study, many women are attracted to sexist men, even if the latter are “benevolent.” Is it a sort of “fatal attraction,” in a way, with the woman losing more than she thinks, even though she dare not admit it. Can it be that the woman is totally lost by the irresistible allure of a Christian Grey? What is interesting is that feminists are just as much prone to be trapped by BS men, as non-feminists. The other salient point to arise, is that women are much more likely to accept BS men if it leads to a romantic relationship, rather than just occurring on the workplace. Maybe another human phenomenon plays a crucial role. A phenomenon that is not once mentioned in the cited literature, but is described so poetically by Plato – love between a man and a woman defying all forms of logic and reason.

(2) Pelin Gul, Tom Kupfer – Benevolent Sexism and Mate Preferences: Why Do Women Prefer Benevolent Men Despite Recognizing That They Can Be Undermining? Personality and Social Psychology Bulletin 45(1) May 2018 (link in text)