Maybe this time, Mister Johnson has so run out of ideas and friends to deliver Brexit, that he has to rely on dead members of parliament who have the innate ability not to answer back or refuse.

Boris Johnson’s advice to Parliament on the best way to remember Jo Cox is nothing short of shameful. Jo Cox was brutally murdered during the 2016 referendum campaign by a deranged fascist who shouted, “Britain first,” during the attack. For a man in such power, Boris Johnson shows us once again that he has absolutely no command of the English language by not realising how illogical, misplaced, and insulting his remarks actually are. There is no stopping the UK prime minister, who having managed to refer to Muslim women as letter boxes and bank robbers, now has the necessary vocabulary to insult the dead.

But what I will say is that the best way to honour the memory of Jo Cox and indeed the best way to bring this country together would be, I think, to get Brexit done. – Boris Johnson

It is hard to believe that Johnson’s statement,“the best way to honour Jo Cox is to get Brexit done,” has actually come out of the mouth of the leader of a Western democracy. It is a statement that not only insults the late Jo Cox who was murdered for her views, but lacks any sort of logic since Jo Cox was campaigning for the UK to remain in the EU. Is he actually saying, “let’s honour this lady by making sure that the very thing she was fighting against and that claimed her life, be delivered?”

In trying to defend Johnson’s remark, conservative party chairman James Cleverly argued that what Boris Johnson actually meant is that we should all get on and deliver Brexit to avoid that anyone else gets hurt or, even worse, killed. Well, that’s made things a lot more moral – Jo Cox will maintain her status of, “the only MP killed during Brexit.” She deserves an honour because no one else wants to share what she went through.

Maybe the truth is that this time, Mister Johnson has so run out of ideas and friends to deliver Brexit, that he has to rely on dead members of parliament who have the innate ability not to answer back or refuse.

It is a sorry state of affairs when public figures have no other evocative capacities than to throw acrid words in each other’s faces and get all worked up when they receive a reply that doesn’t please them. I suppose that it is when the political ideas run out that the insults and incitement to violence take over. This, in fact, is what the 2016 referendum has done – silencing Westminster by delivering a verdict that no one can cope with. Two prime ministers have tried and both have failed, but at least Theresa May was polite about it.

Boris Johnson has fallen to a new low and has now firmly set his foot in the moral quicksand that defines Trumpland. Those who doubted the acute resemblance between the two leaders can doubt no more – Johnson and Trump are one and the same. Their verbal dexterity is second to none. The uncontrollable evil fire coming out of their mouths is characteristic of ageing dinosaurs suffering from whooping-cough and who will become extinct when a major ecological catastrophe hits the earth.

In the meantime, Jo Cox’s grieving husband has shown the sort of dignity and restraint that are so lacking in Boris Johnson. 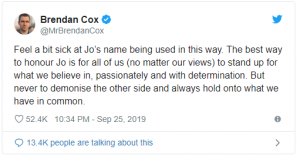 In standing up for what he believes in – namely, a clean break from the entanglement with the European Union and a right to make trade deals around the world without having to put up with immigration – Boris Johnson is defying those who pose questions. This week, he has gone one step further by insulting the dead. It is an attitude that is both immoral and dangerous.

In asking for Parliament for support, Johnson is demonizing parliamentarians who do not see like him. He also has the audacity to publicly question the independent judgement of the highest court that does not think like him. The UK’s prisons are full of convicts who do not agree with court decisions.

That is Boris Johnson’s idea of compromise, something that Jo Cox stood for. It just shows that Brexit is as divisive as it is invasive. It is ridding the public debate of humanity, the ability to listen to others, not to demonize. And now, we have had a taste of how Brexit can even reach out to the departed.