Maybe it’s the way she said it, the fact that she is a young girl on the verge of becoming a young woman, but climate change activist Greta Thunberg said a few things that we, as adults, found distressing. Watching her speech in front of the United Nations filled me with a sense of uneasiness. At first, I thought to myself that this 16-year-old, holding back her tears with difficulty, was either too intelligent for her age or being manipulated and used by higher powers. I watched her speech again, later, when the shock of seeing her for the first time had gone away. I then realised why I felt so ill at ease with her – Greta Thunberg is telling the truth and blaming me for it.

In fact, she is not only blaming me, but all of us – we who have just come back from our summer holidays and who are already planning our next destination that we will reach using a polluting commercial airline or a car running on fossil fuels. From the wisdom of her 16 years on earth she is crying out aloud what each one of us and those who govern do not want to hear. We were warned long before Greta Thunberg was born.

But worst of all, through Greta Thunberg I hear the voice of my 14-year-old son asking me a probing question to which I have no answer – “Pap, what have you done, whilst you knew?” It is a question that drills deep down into my soul and stirs a profound feeling of at best, responsibility and, and worst, guilt.

All those years ago, a much wiser and powerful person than Greta Thunberg, the late former French president Jacques Chirac, had warned us in a similar fashion that, “our house is burning and we are looking the other way.” His outburst caused no indignation. How is what he said so different from what Greta Thunberg is saying?

For more than 30 years, the science has been crystal clear. How dare you continue to look away? – Greta Thunberg

The answer is that humanity is not looking away, for it cannot see beyond the image of an innocent autistic little girl telling the world to forget about short-term profits for a moment, and to seriously think about the future of the planet. We are akin to rabbits caught by the blinding spotlights of an advancing car. We are unable to move, not being able to think clearly. We can only hopelessly stare into the glaring image of a young girl whose words and attitude paralyse us.

Greta Thunberg may just be the beginning. The young generation has destabilised the established order and moral values once before, in 1968, and can do so again. Whereas, back then, the young were fighting for their freedom, they are now fighting for their very survival that may encompass less freedom than before in order to combat the deleterious effects of irreversible global warming. As in 1968, the older generations will be pushed and shoved, their attitudes and beliefs vanishing like the morning dew. I am part of an older generation and that is what is so destabilizing.

A few weeks ago, I did enquire about the possibility of installing solar panels on the roof of my house, only to find out that the panels would not work due to the roof facing South-West instead of South-East. Panels functioning on daylight instead of solar energy would have solved the problem, but the technology does not yet exist.

The young generation is now asking questions and will, in the future, demand explanations. It will look for, and find, people to blame – the parents and grand-parents of all the children who are today demonstrating against climate change.

But those in power do not want to hear. President Trump judged it not necessary to take Greta Thunberg seriously, and saw a young girl who seems happy enough. 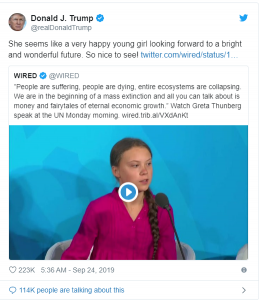 Others are too busy with “Greta bashing,” attacking her for who she is or concentrating on single sentences of her speech, taken out of context, to diminish the importance of the message she was delivering and undermine her credibility. There should be no need to defend Greta Thunberg for who she is or against what some make her out to be, such is the power of the truth she speaks.

The inconvenient truth is that we are all guilty of “greenwashing.” We ignore what she says now and what others have said before her. We are all aware that nature is irreversibly changing, that freak weather events are becoming increasingly common, and that ecosystems and ice caps are disappearing. We have witnessed trees turning brown at the beginning of August. We know that a great many of our actions contribute to global warming and yet, we put this awareness to one side and hide it like dirty money in a bank account that no one knows of and that we keep secret.

Greta Thunberg is no exceptional teenager. She admits herself that she,“should be at school on the other side of the ocean.” She has no sacred force capable of changing the world and saving it. She is just an ordinary schoolgirl asking grown-ups to look after her future and her friends’ futures. What is exceptional, though, is that she has crossed the Atlantic ocean to do so and that, on the other side of the deep blue waters, the adults are not listening and do not have an ounce of the courage that she has. That is what makes Greta Thunberg such an exceptional teenager.